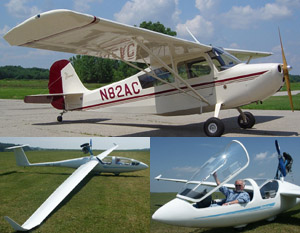 A study in contrasts shows the traditional Champ 7EC above a modern powered glider, the TST-14 Bonus. The first is a Standard Category airplane and the latter is the first ASTM Glider. Email for 7EC info -or- email for TST-14 info.

Among new LSA approvals, some sneak by my observation post. Two new entrants make an interesting couple. One is our first-ever glider approval; the other is a new “Sport Pilot eligible” aircraft but not an SLSA. Curious? *** LSA Gliders of Wisconsin won a SLSA airworthiness certificate for the first glider meeting ASTM standards. They import the TST-14 Bonus, a lovely long-winged, self-launch motorglider of interest to soaring enthusiasts. The all-composite tandem two-seater can be a pure glider or take a boost from a Rotax 503; either way it claims a 40:1 glide angle. “It can be registered as a SLSA Glider or an experimental,” says importer Steve Meassick. *** Taking another tack is American Champion (ACA), whose 7EC is not a SLSA but a Standard Category production aimed at use by Sport Pilots or licensed pilots exercising those privileges (no medical needed). The maker of the Citabria (in which I logged my first 35 hours) to Super Decathlon now offers “The Champ” for $85,900 in basic form without flaps.