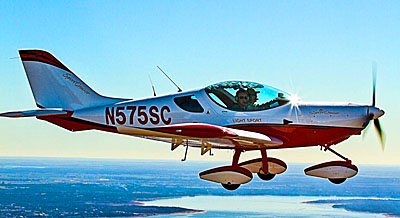 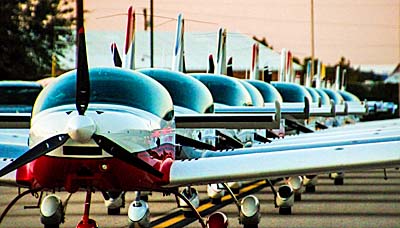 Catch our own video in this SportCruiser aircraft review, one of around 500 videos we’ve produced since 2008.

Flying is serious. You can … well, perish, perish the thought. Of course, you are vastly more likely to die in a car or maybe even in your bathtub. We all know that. We also know that aviation has not earned an enviably good safety record by emphasizing pure fun. The “fun” part may be implied but is that a bit too dry if we hope to attract newcomers to aviation?

For many years a long while back I was involved with hang gliding. I ran a dealership and flight school in the mountains around Chattanooga, Tennessee. I want to tell you that folks who jump off mountains in hang gliders know how to have fun. OK, technically, you don’t “jump off” mountains — you “launch” — and while those pilots do have fun, they are zealous about safety. In the early days, way back in the ’70s, the sport suffered a rash of accidents but today you very rarely hear about a hang glider accident. Fun, however, was most definitely part of the motivation to learn the sport of flying hang gliders.

I believe this shows you can have fun in aviation even while being a stickler for safety. Recently I became more aware of how one Light-Sport company is pushing hard to make themselves look like the FUN guys in Sport Pilot training. To get an idea, check out the video below.

I trust you enjoyed that and got the humor involved in claims like, “We’ve been to the International Space Station.” Look, I completely get what these fellows are trying to accomplish, led by rising YouTube star, Nathan Rausch — repeatedly whipping off his sunglasses in imitation of David Caruso playing Lieutenant Horatio Caine on “CSI Miami.” Flying doesn’t have to always be so deadly serious and many believe you should have a good time learning to fly.

U.S. Sport Aircraft is creating a whole series of videos to showcase their efforts. You can sign up here. People seem to like USSA’s videos making comments such as: “I just watched your video last night and was dying laughing…” or “I wish I had watched your flight training series before I started training at my current school.”

Team USSA say their goal with their video channel is to highlight various aspect of their company including flight training, aircraft sales, fractional ownership, aircraft maintenance, and SportCruiser flight tours. I recall the former Saturn automobile company focusing on building a community of their owners and USSA aims to do the same, referring to their “country club atmosphere.”

In the age of social media, including YouTube, it makes sense to use new methods to attract new student pilots. The old way is, well, old. I want to encourage USSA’s fresher approach

Flight school manager Nathan said, “When we started these videos we were aiming to educate people about aviation. Then we started to add comedy and we realized that we hit a nerve that has made us really popular among viewers. People want to be entertained.”

Getting a bit dryer about what USSA offers, I want to present some points that help define the company in more concrete details … and I promise not to metaphorically whip off my sunglasses while doing so.

In the greater Dallas/Fort Worth area, U.S. Sport Aircraft, based at the Addison airport (KADS) is about the only Light-Sport-equipped flight school in the area, Nathan confirmed.

USSA reports maintaining 5-10 aircraft in their flight school training fleet
They say they have an average of 50-75 full time students in flight training at any given time
They say many new SportCruisers are sold every year
USSA has 18,000 square feet of maintenance space
They offer 18,000 square feet of showroom and flight school with three classroom work areas
Students have the option to preflight in-hangar (out of the elements)
They offer monthly weekend Sport/Private certificate ground schools
USSA’s SportCruiser Flying Club hosts 2-3 SportCruiser trips every year; generally overnight adventures to destinations 200-400 miles away drawing 10-15 participants
Owners can partake of USSA’s SportCruiser Owner Concierge Program including aircraft fueling, washing, and hangarage

Since nearly the beginning of Light-Sport, the SportCruiser has been one of the top-ranked sellers. More than 200 aircraft appear in the FAA N-number registry. With this gang of gung-ho USSA’ers running the show and finding the time to make watchable videos, it would appear they can keep the operation running a full tilt for years to come.