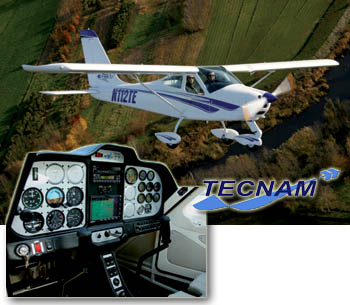 SEBRING 2008 UPDATE — U.S. rep’ Lynne Birmingham beamed, “The Eaglet has landed!” She referred to the newest Tecnam model to win SLSA approval — the fourth model from the Italian manufacturer. Eaglet makes its worldwide debut at Sebring 2008, which opens today. Tecnam has achieved an enviable #4 rank in the U.S. Light-Sport Aircraft fleet. And around the world, Tecnam, a six-decade-old Italian company, has more than 2,100 aircraft flying making it arguably the largest producer of this class of airplane. *** Mike Birmingham reports the new Eaglet is a blend of the best qualities of the strutted Echo Super and the cantilevered Bravo; Eaglet is strutted. It has a new look with resculpted wing root and larger door windows to allow better lateral visibility plus longer, more comfortable seat cushions. The new model sports a redesigned instrument panel that will appear in other models later. The nose cowl was lenthened which enhances handling, says Mike. *** Tecnam has been busy. Besides changes coming to the Echo Super and low-wing Sierra, Tecnam will offer a twin Rotax 912S aircraft that bears a great (and complimentary) resemblence to the Partenavia built by this company years ago. *** Finally, welcome to SLSA #72 and 73, respectively the Skykits Rampage and Gobosh G-800. I’ll have more on these in the days ahead.