Before America becomes completely consumed with Eclipse Viewing Fever, you might want to pull your (solar filter-protected) eyes away from the soon-to-darken sky to catch a few glimpses of intriguing aircraft from EAA’s summer celebration of flight. 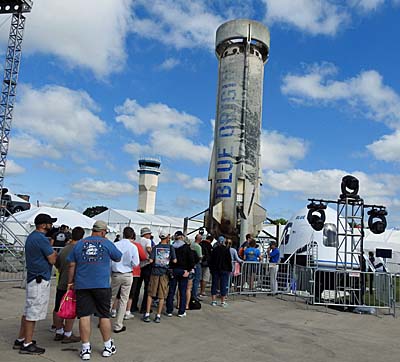 In this pre-Eclipse weekend post, I’ll show you some images of cool flying things I saw at the big event.

Starting off with my fascination about spaceflight, EAA communications guru Dick Knapinski told of the challenges of arranging an 80-foot-tall flying machine on the central Boeing Plaza square. This is where you see a changing kaleidoscope of aircraft from old to new and slow to fast. However, no aircraft I’ve ever seen in this location flies as fast, stands as tall, or is more unique than the Blue Origin rocket.

From the billionaire-thick wallet of Amazon founder Jeff Bezos comes this space flight company that is competing with Space Exploration or SpaceX among others in the new era of private space companies. The latter corporation may be snatching the lion’s share of mainstream news but Blue Origin actually made the first successful landing of a rocket and this was the very equipment on display, charred exterior and all. Crowds lined up to have a gander. 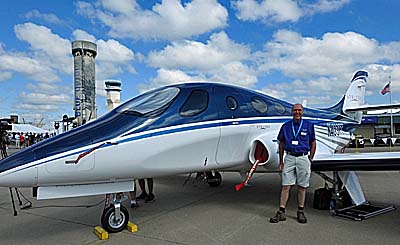 Nearby, from one of light aviation lightest aircraft sellers — Michael LeMaire and his X-Air LSA — was the first public debut of the Stratos 714. Talk about having all the right toys in your hangar, eh? One one hand you could have a very lightweight fun flyer like X-Air LS for joy-ride flying around the patch or around the region. Or, if you gotta go places in a hurry, hop in your sleek jet and zoom past 400 knots.

Michael has been pursing the Stratos project for several years, since before 2011, and the aircraft is now flying. It reminds me of another project called Sportjet from Colorado. It also looks a bit like Cirrus single engine Vision jet. All three are similar by virtue of being single engine jets. The latter already has orders and a factory to produce it while Michael and his team are still assembling the myriad pieces of this puzzle. 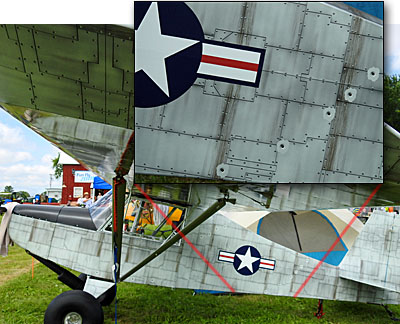 Machines like Stratos aren’t what we usually cover here — any more than space rockets — but since it was beautiful to behold and is coming from one of our LSA suppliers and supporters, I enjoyed a look-see and thought you might as well.

On the way to the Ultralight Area — rebadged as the Fun Fly Zone (an accurate name, IMHO) — we passed by the antique airplane area with its own red barn, seen in the background of the nearby image. What caught my attention was the snazzy paint job or decal on this taildragger.

It doesn’t compare to the superlative FK-51 that may (or may not ever) arrive in America. Jon Hansen and his family team has been waiting far too long for their order to arrive but what I saw at Oshkosh ’17 was a mighty fine paint or decal job on which some owner invested many hours and considerable amount of cash, I’m guessing. The bullet hole effect has been seen everywhere but I admired the detailed patchwork finish resembling an airplane covered with hundreds of tiny aluminum pieces. Well done! 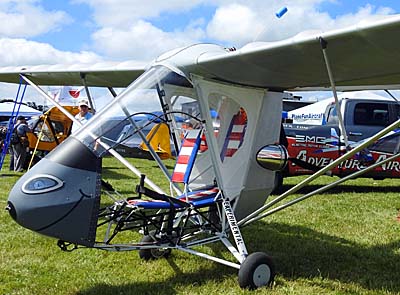 Finally, we arrived in arguably my favorite area of EAA AirVenture Oshkosh, the Fun Fly Zone, where we found many aircraft I will report — and about which Videoman Dave and I shot many videos.

We didn’t do a video on the two-seat version of Adventure Aircraft’s EMG (Electric Motor Glider) but we shot a video on the single seater earlier. Creator Brian Carpenter has invested a few years in this nifty project as he breaks new ground; the two-seater tells me the product is getting closer to the market.

EMG-2 (my name) has Brian’s signature look to it and I’m guessing it would be a hoot to fly. You can see his shiny electric motor at the aft end of the fuselage, giving a vaguely equivalent look to a Piper Cub with the engine cylinders sticking out of the cowling …only Brian’s bird will make a lot less noise slipping through the sky.

I hope you enjoyed this glance at four completely different aircraft.