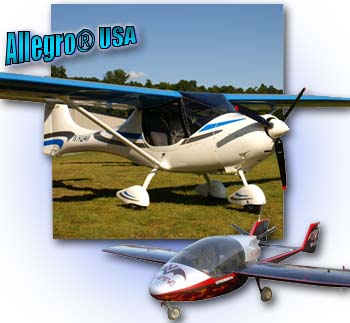 Allegro 2007 is back! This modestly-priced LSA — the third ever approved, back in May 2005 — is returning to market from a company associated with Sadler Aircraft and its Vampire (lower photo). Until the new model is available you can read my earlier
Allegro pilot report.

Some have likely forgotten that the Allegro was the third Special Light-Sport Aircraft ever certified, following only Evektor’s SportStar and Flight Design’s CT. It was also a market leader early on…in fact, it did so well, Fantasy Air (the now-bankrupt Czech designer and producer) still holds the #12 position even without a sale in nearly two years. *** The founding company’s troubled history is now being replaced with an all-American manufacturing effort based on the revised Allegro 2007 model that saw improvements to better suit the American market. Allegro USA LLC, the newly-formed company, announced in June that Allegro will now be built completely in Roseburg, Oregon. Allegro USA believes this will eliminate concerns for warranty, parts, delivery, and financing. *** Some LSA suppliers may be cautious in today’s economy but Allegro USA is taking strides to regain its market position. “We believe in the Allegro and the American LSA market, and will continue with our expansion of the Allegro for the United States market and beyond,” stated Doug Hempstead, president of Allegro USA LLC. “It has never been easier, nor a better time to own a new Allegro light sport aircraft than right now.” The company has not announced prices yet nor is its website up. But the reasonably-priced, now all-American Allegro is returning to marketplace and for cash-strapped American pilots, that seems like good news.