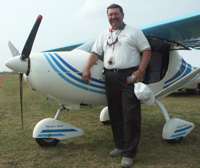 In only the third approval under the new Sport Pilot rule, B Bar D Aviation and Fantasy Air USA announced news that their Allegro 2000 has received its certification as a Special Light-Sport Aircraft. Allegro 2000 has been warmly received and Fantasy Air USA can now begin deliveries of ready-to-fly aircraft to customers that have placed orders. See my review in Ultralight Flying!’s 5/05 issue — the article will post here soon. SPLOG will report two more certifications in the near future.