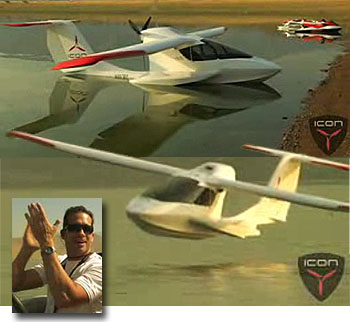 Visit YouTube to see the first flight of the Icon A5. (Inset) Founder and CEO Kirk Hawkins applauds the effort. *** If your LSA company has good first flight video of a new model, send me the location where it can be viewed.

I’ve rarely promoted watching a YouTube video in a blog post. And this obviously isn’t the first SLSA (candidate) to make a first flight. But I’d repeat this many times if all first flights were as well documented as the first flight of the Icon A5 LSA seaplane. *** The L.A. company has shown unusual levels of professionalism and showmanship. So their creation of a quality video for a first flight comes as little surprise. *** Icon engineering team member Jon Karkow made the first flight on Wednesday, July 9th. Beside his engineering duties, Jon is an accomplished test pilot with a slate of first flights including the late Steve Fossett’s GlobalFlyer from Scaled Composites. *** “Everything went as well as an initial test flight possibly could go; so I was very pleased,” said Karkow. “The aircraft flew exceptionally well and met or exceeded our design expectations. The A5 seems to be a great aircraft right out of the box.” *** A first successful flight is a thing to rejoice, of course, but lots of work remains. The prototype will go through many more trials and then a pre-production model will be built to verify all the ASTM standard compliance points. Production is expected in late 2010.