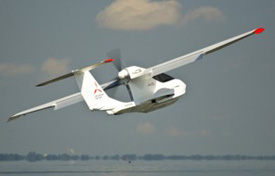 Read more about Icon’s A5.

The splash heard ’round the LSA world continues to send out ripples, though it’s been years now since startup LSA maker Icon Aircraft first announced, with considerable marketing fanfare, its amphibious light sport amphibious project, the A5. *** Now comes word today from the company that’s it’s just completed a “demanding regimen of spin-resistance test flights. This milestone will make the A5 the first production aircraft in history to be designed to and completely comply with the Federal Aviation Administration’s full-envelope Part 23 spin-resistance standards developed from NASA’s work on the topic.” *** The lengthy release (a PDF file) goes on to enumerate the general cost in lives and hardware to civilian flying from stall/spin accidents, and cites its intentions to “design the A5 to the more difficult to achieve but safer standard of ‘spin resistant,'” as opposed to spin recoverable. *** Icon also conformed its testing regimen to the FAA Part 23 standard for certified aircraft. *** More than 360 “test cases” included varying control positions, power settings and centers of gravity. *** Said ICON Aircraft VP of Engineering Matthew Gionta, “We’re excited to announce that after many months of exhaustive design and flight testing, the A5 has achieved this standard.” *** This is interesting: citing NASA design work in the ’70s and ’80s, the company says it mined results from that study to create “a cuffed wing design that employs multiple proprietary airfoils across the span of the wing. Additionally, these specialized airfoils used for spin resistance were not suited to the no-flap wing design ICON had previously planned to use on the A5, so ICON engineers chose to reintroduce wing flaps to preserve takeoff performance on the water.” *** The special cuffed wing design should also help make sure that the A5 stays within the minimum stall speed required by the FAA rules about LSA; speculation has arisen that the previous wing design was having challenges meeting the spec, and that excessive airframe weight was also a challenge. *** The release cites the Ercoupe, Jetcruzer, Cirrus SR20/22 and Cessna Corvalis as having some spin-resistant characteristics, while stating that canard aircraft in general have an easier time of it but no production conventional production aircraft has in fact ever achieved the classification of “spin-resistant”, which is interesting to know. *** That would indeed make the Icon A5 unique in aviation history, as the company claims. *** Former USAF jet fighter pilot and Icon CEO Kirk Hawkins weighed in: “I’m incredibly proud of our engineering and fabrication team. While creating a full-envelope spin-resistant airplane was extraordinarily difficult and took longer than we expected, it was absolutely the right thing to do for safety and is a game-changing innovation.” *** “Delivering an aircraft that provides excellent control throughout the stall while being resistant to entering a spin dramatically raises the bar for light aircraft safety by decreasing the likelihood of inadvertent stall/spin loss of control by the pilot. This is especially important at low altitude where the majority of sport flying will occur.” *** Readers may remember that the Cessna Skycatcher had its problems and considerable production delays when it performed Part 23-rigorous spin training and suffered two prototype losses (in which the pilots were saved by onboard ballistic parachutes both times). The A5 also will carry an onboard ballistic chute. *** No mention is made of when the production A5 will at last be delivered. Icon does however refer to its aggressive production preparation work, including tooling, materials selection and factory setup. *** Sounds like it’s going to be awhile — probably end of 2012 at the earliest — but regardless we salute the company for hanging in there for more than six years now, and applaud its determination to deliver an amphib SLSA that promises to be a dramatic step forward in safety when it does finally arrive.