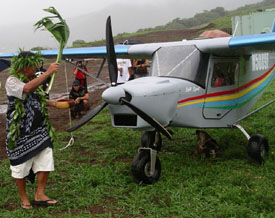 Does it help to have your new SLSA blessed in the Hawaiian fashion? I don’t know but that and a parachute might save you one day. This traditional ceremony welcomed the island’s first SLSA, said Skykits.

Barely over a month ago, I reported that Skykits Corp won their first approval for the Savannah. In that SPLOG posting I said that the plane would be produced with three wings mated to the same fuselage. Now, proving the point, Skykits president Eric Giles announced his second SLSA approval…for a Savannah ADV. Eric also claimed the airplane delivered to Hawaii was the first SLSA to be registered in the state (photo). *** Savannah ADV has a tapered airfoil with full-span retractable leading edge slats and double-slotted flaps, both operated electrically with a mechanical backup. Skykits says, “The new wing increases cruise speed by 25 mph while maintaining the STOL capabilities. “As their company name implies, kits are also available. The questions arise, though: Is this a new model or a model variation? Do we count it as a new SLSA? We’re bound to have more such questions as the LSA evolution continues.