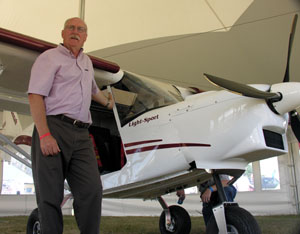 Savannah is an all metal, high wing, tricycle gear, STOL airplane with side-by-side seating. Eric Giles poses with his new Special Light-Sport Aircraft. A Savannah SLSA will sell for “under $60,000.” For more info click to send e-mail.

The first Canadian company to win SLSA approval was Summit and their powered parachute, itself the first (and still only) such to declare compliance with ASTM standards. Now comes the High River, Alberta-based Savannah (photo). Skykits Corporation president Eric Giles — whom I met at his display at the Arlington Fly-in — called to say he had gained approval for two Savannahs on August 15th, becoming the 39th SLSA. Savannah was created in Italy as a variation of the CH-701 though to many eyes it enjoys a more pleasing appearance. Savannah is available in three models all using the same fuselage but with different wings. The standard Savannah offers fixed, leading-edge slats while the VG model uses vortex generators to increase STOL capabilities. Savannah ADV has a tapered wing featuring electrically operated slats and electrically operated double-slotted flaps with separate ailerons. For those seeking a utility airplane with very short takeoff and landing, Savannah offers a new choice.