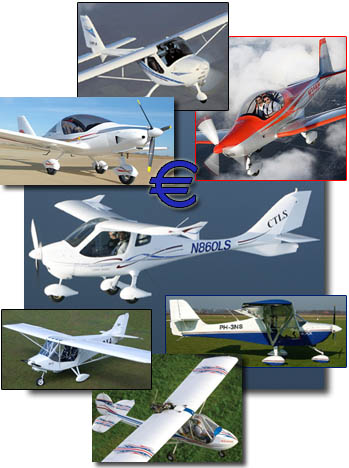 Recently the euro hit 1.56 to the dollar. Watch for LSA prices to increase…again. Above the CTLS are three premium brands: (L-R) Sting S3, Remos G-3, and SkyLeader 500. Below are three bargain SLSA: X-Air LS, Sport Hornet, and EuroFox.

Lots of folks are wondering about, or complaining about, the seemingly high prices of Light-Sport Aircraft. Recently a prior editor-in-chief of EAA publications, Scott Spangler, wrote a blog on JetWhine. Scott focused on expensive avionics as one reason LSA cost so much. While a factual observation, I believe the price increase is more complex. *** First, LSA suppliers install equipment like autopilots because buyers ask for them. A large chunk of all LSA are sold to “retiring” GA pilots used to such equipment in their Cessna or Bonanza. Simpler LSA are available; most suppliers have one. But customers are buying the loaded-panel jobs. *** Let’s look closer at those rising prices. Five years ago, in the pre-dawn of SP/LSA, a CT was selling for $60,000. Today it’s $125,000. By far the largest piece of that doubling is the euro’s soaring value compared to the dollar. Were the currencies at parity, that $125,000 would be $80,000. By the way, suppliers earn not one cent of profit from that extra $45,000! The “real” (non currency exchange) increase from $60,000 five years ago — about $20,000 — is generated by two factors. Most obvious are the avionics and other accessories. A $125,000 CTLS comes standard with dual glass screens, a sophisticated GPS, radio, transponder, a $5,000 emergency airframe parachute, and more. The second factor is the time value of money — another 18% or $10,000. So an $80,000 price (if the euro equaled the dollar as it did in 2002) is not much higher than the $60,000 of 2003. *** Despite those price hikes, here in 2008 you can choose the ready-to-fly X-Air LS for $46,000, the Sport Hornet for $49,000, the EuroFox for $69,000, or the SportCruiser for $79,000. Even simpler aircraft may be coming in the $40-45,000 range. Those low numbers barely exceed the component cost of kit aircraft. *** Regardless of the preceding discussion higher prices remain a fact of life. You still have to shell out $125,000 for a CTLS (you can finance this for a bit more than $800 a month) though you get a lot of airplane for the money. If buyers truly want cheaper, simpler aircraft, they ARE available.