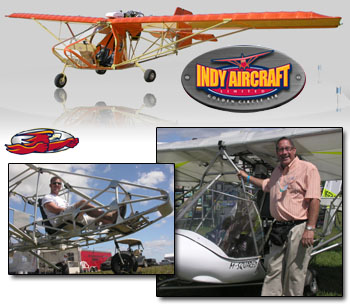 Three years into Light-Sport Aircraft and after the expiration of the Ultralight Trainer exemption, three ultralight producers say they’re working on SLSA certification. At top the Indy Aircraft T-Bird I and II; bottom left is a bare-frame CGS Hawk (Nick modeling); at right M-Squared owner Paul Mather stands by his Sport 1000.

Taking a kit aircraft company to full ASTM approval is a very big decision for small companies. Simply assuring you have documents to support a declaration is, by itself, a major task. Then comes a decision about fully building or going the Experimental LSA kit route. A company must first fully build and certify at least one Special LSA, but once done, they can elect to provide a kit only…or to factory build and supply kits. Small shops could fully build 20-30 SLSA and supply additional ELSA kits and parts to make a healthy business. *** We may finally see such entries. Recently I wrote an updated pilot report on the T-Bird I from Indy Aircraft. Boss Bret Kivell said Indy is working on approval. As an ELSA, the single seater could be HKS (four-stroke) powered, which would make it one sweet sport aircraft. Likewise development is underway at Paul Mather’s M-Squared Aircraft where his Sport 1000 could gain SLSA approval later this year. Finally, one of Chuck Slusarczyk’s CGS Hawk family may become certified. All three principals have the knowledge and experience they need; the aircraft have long, successful track records; and each could sell at modest prices. All three are Made in the USA.