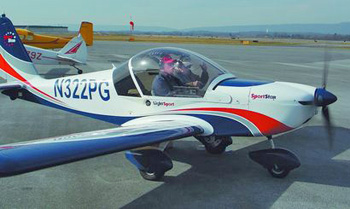 Guy Reynolds sits in the cockpit of his Evektor SportStar light sport aircraft Friday [November 30, 2012] before taking the controls for a flight around the Eastern Regional Airport to celebrate his 100th birthday. He is the oldest known licensed pilot in [West Virginia]. photo of Guy Reynolds by John McVey of the Martinsburg, West Virginia Journal newspaper 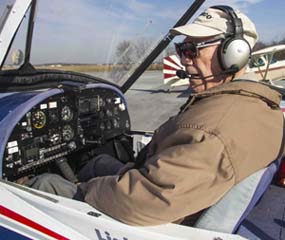 What will you do on your 100th birthday? Guy went for a flight. 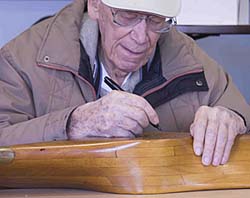 Guy signs a prop that will be on display in the airport terminal. Bart Rogers who sent this photo wrote, “I’ve promised all other aviators they can sign it when they turn 100.” 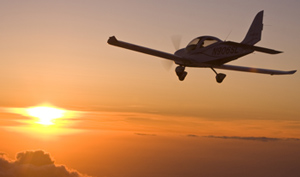 This article follows up on an earlier one about Guy Reynolds. Yesterday, on his 100th birthday, Guy took the skies as he has so regularly, flying his Evektor SportStar with a fellow pilot along for safety. Rather than interpret, I present local journalist John McVey’s entire piece below. John also gives you a perspective on Guy, a fellow aviator we can all admire.

The following was written by John McVey and published by the Martinsburg, West Virginia Journal newspaper. Bold accents are added. —DJ

MARTINSBURG — Thomas Guy Reynolds Jr. eased back on the stick of his Evektor SportStar light sport aircraft and it lifted effortlessly off the runway at the Eastern Regional Airport. He circled the field three times, making a couple of low passes over the runway for pictures, and softly set his plane down. That would not be extraordinary, but Reynolds flew Friday on his 100th birthday. He is the oldest known licensed pilot in West Virginia and definitely the senior pilot in this region.

“The flight was fine,” Reynolds said afterward. “The air was nice and smooth.”

He takes a co-pilot with him in his two-seater plane, usually Bart Rogers, but flying on his birthday has become a tradition as well as celebrating the day with fellow pilots at the airport, who fly in to enjoy lunch, cake and stories.

Rogers was grateful for the weather Friday, which was perfect for flying — little wind and clear skies.

“It is a thrill to fly with someone who’s 100 years old,” Rogers said. “He’s as sharp as a tack.” And Rogers does not touch the controls. Reynolds is the pilot.

Needless to say, Reynolds’ centennial birthday was very special, drawing a quite a crowd of family, friends and admirers.

“I am in awe of him, totally in awe,” said Ann Reynolds Carden, who traveled from New York to see her father fly. “He doesn’t have any fear, so I’m not afraid when he flies, but I don’t like to fly.” Understandably, she is extremely proud of her father. “He is a wonderful father; he’s a good man; he’s an amazing, incredible human being,” Carden said.

Reynolds was born in Martinsburg November 30, 1912, the son of the late Thomas Guy Reynolds Sr. and Lora Lenora Stotler Reynolds.

He graduated from Shepherd College in 1933 with a degree in education. Reynolds taught school in Berkeley County for 18 years; ran his own television and radio repair business; served as an electro-mechanical designer for Thieblot Aircraft Co., which was located at the airport; and worked as an engineer at Corning Glass Works in Berkeley County, where he was appointed to the position of senior associate. He was the first person at the local plant to receive that honor.

Reynolds took his first flight from Shepherd Field, now the Eastern Regional Airport, in 1929 in a Ford Trimotor airplane.

In 1943, he organized the Martinsburg Composite Squadron of the Civil Air Patrol, serving as its first commander. The unit’s insignia bears his initials.

He was recognized in 2004 as the Berkeley County Citizen of the Year for his lifetime of volunteer service to the community.

In 2006, Reynolds was named an Outstanding Alumni of Shepherd University. He was inducted into the West Virginia Voter Hall of Fame in 2008 for having voted in every general election since at least 1942, when records were first kept.

And on his 93rd birthday, he made a parachute jump — a lifelong ambition — with the Chambersburg, Pennsylvania Parachute Club. He was, and as far he knows, remains the oldest person to parachute in Pennsylvania.

“I’m just blessed, that’s all I can say,” Reynolds said about his aptitude for flying during media interviews. “I’m lucky I can fly. I feel comfortable in the air, relaxed and I enjoy it.”
Asked for his advice to young people, he said, “If you want to do something, do it. You don’t know when you might not be able to do it.”