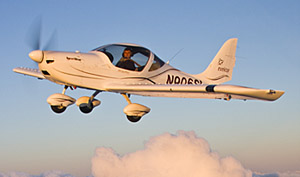 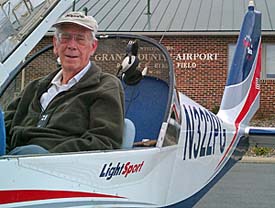 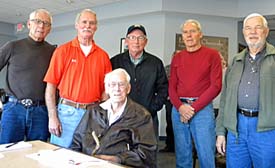 Some see a centenarian in Guy Reynolds; others see a fellow pilot. photo provided by John McVey 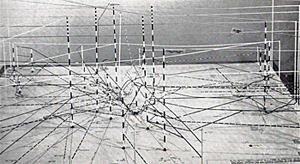 This intricate model of air traffic patterns was built by Guy Reynolds while he worked for Thieblot Aircraft. It was featured in NBAA’s Skyways magazine in August of 1959. Thanks to aviation historian Bart Rogers for providing this and other information about Guy’s background.

On November 30th, Guy Reynolds will celebrate his 100th birthday by taking a flight in Light-Sport Aircraft. Putting a finer point on it, he’ll take this flight in his LSA. Are you surprised that a centenarian has an LSA? Admit it… I was. However, Guy is no ordinary guy. He bought his Evektor Sportstar back at the beginning of LSA and he’s been flying it about 100 hours every year. That’s probably more than you fly your LSA. Impressive even for a young 50-year old pilot, this fact is, well… astounding for a 90-something pilot.

Before you question the wisdom of this flight, let me assure you Guy is a pretty together fellow. We spoke on the phone and other than being a bit hard of hearing, he sounded great. I accept that he’s 99+ because he said so but he sounds like a younger person. He was savvy enough to voluntarily give up flying with anyone other than another pilot at age 95 because, “I might have a stroke or something and don’t want to endanger anyone.” So, quit your worrying. Guy is simply a fellow pilot who loves flying and doesn’t want to stop. Though he’s now given up his medical, he’s healthy enough to have gotten one when he was 93 years old. Facilitating Guy’s continuing interest in flying his Sportstar, he is supported by a group of fellow local pilots.

Inspired when he witnessed the Navy’s USS Shenandoah airship in 1923 followed by a first flight in a Ford Tri-Motor in 1928, Guy started flying in the early ’40s, got his license in 1945, and logged time on a dozen aircraft models. He stopped in 1952 due to other responsibilities and did not return to the aviation family until 2005 with the advent of Light-Sport. He likes low-wing airplanes, researched articles, and selected the Sportstar. “It’s nice to fly, comfortable, has plenty of leg room and is low in cost,” observed Guy. Like many who switch from heavier general aviation aircraft he finds it a bit sensitive and would prefer wing tanks for ease of filling. (Newer Evektor models answered this request.) His aviation buddies provide a stool to make getting up on the low wing easier and they carry it along on short cross country flights.

This news came to me through longtime Evektor dealer, Jeff Conrad. “Guy was our very first Sportstar customer,” reported Jeff. “He purchased Evektor Sportstar, N322PG. This aircraft was licensed the same day as N400EV, April 8, 2005. So it shares the distinction of being [among the first] SLSA in the world.” For those that may have forgotten Sportstar enjoys the distinction of being SLSA No. 1 accepted by FAA. “I’ve never regretted the purchase,” said Guy.

“I delivered Mr. Reynold’s aircraft during Sun ‘n Fun 2005. Best I can remember it was April 13-14th. The Bill of Sale was dated March 29th with registration March 31st.” Given these dates, Guy’s Sportstar may have been the first end-user delivery of an SLSA, Jeff speculated. For T. Guy Reynolds. Jr., LSA was a dream fulfilled and he wasted no time. “When Guy bought his Sportstar he was 93 years old,” noted Jeff. “Since then he has accumulated 800 hours as he approaches his 100th birthday. He is surely the oldest living Sport Pilot and still flying!”

In his century of living, Guy has done many interesting things. “He’s an engineer and an inventor,” said Jeff. On our teleconference Guy’s friend and local aviation historian, Bart Rogers, spoke of Guy’s work in devising early traffic patterns. “I worked with the three main New York airports plus Chicago and Atlanta,” recalled Guy. Bart told us about an intricate “sculpture” Guy created to illustrate possible approach entry patterns for the New York airports. The flight paths were represented with thin string. “It was quite a work of art,” added Bart (photo). This was all back in the age of the DC-3. He also worked on a then-CAA experiment to put swiveling gear on a DC-3 “so it could land catywampus” in cross-wind conditions as Guy described the effort.

So, you may go have a flight on November 30th and I hope it will be pleasurable and enjoyable for you. Yet until you repeat such a flight on your 100th birthday — should you be so fortunate — you’ll have nothing over Guy Reynolds. I hope for great weather on that momentous day plus spectators who can appreciate how one pilot celebrates 100 years of living by going aloft in his Light-Sport Aircraft. Hearty congratulations to a fellow aviator!

Jeff Conrad was the importer for Evektor in the first few years of Light-Sport Aircraft and remains a dealer today. He joins companies like AB Flight and Dreams Come True, the latter run by Steve Minnich in Dayton, Ohio.