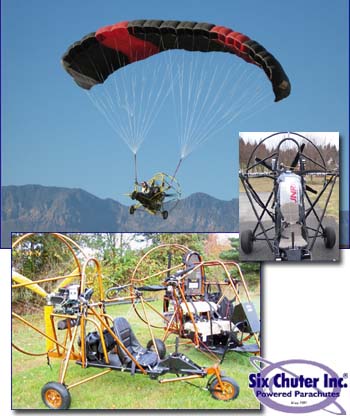 I’ve never flown a side-by-side powered parachute so I can’t comment on the XT SSDC model but the others may be fairly represented by my flight review of the Spirit. See all Six Chuter specs.

Six Chuter marketing man, Doug Maas, figures it’s like soccer where three goals in a game makes a “hat trick.” With their third model gaining SLSA airworthiness before the January 31 deadline for ultralight conversions, the Washington company has earned the sports phrase. The powered parachute (PPC) producer’s newest approvals brings the total to 75 SLSA models…in less than three years! *** Boss and designer Dan Bailey planned to create three models based on common airframes. Consequently, Six Chuter has the market covered like, uh…well, like a parachute canopy. They have a “conventional” tandem (Legend XL); a rare side-by-side PPC (XT SSDC), intended as a trainer appealing to instructors who want to be alongside their student; a single seat SLSA (P103); and a Part 103 qualifier (P103UL), when flown with the Rotax 503 and few accessories. The mainline PPC Legend was derived from Six Chuter’s SR7 and Spirit models but all were redone to fully address the Light-Sport Aircraft rule. *** However, Six Chuter is not only in the ready-to-fly LSA market. They can also supply kits for all models. As an Experimental LSA, the builder percentage can be any value the manufacturer chooses. ELSA kit PPCs are cheaper and offer all the same privileges except doing instruction for hire or rental.