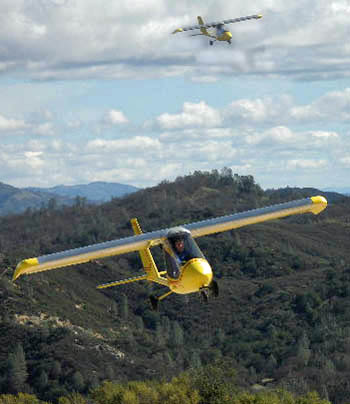 The hum of interest in electric-powered aircraft continues, a parallel to development of electric automobiles. Despite their woes all over the news, the auto industry is spending millions on electric power. In sharp contrast, electric airplane developments are being done on tiny budgets by entrepreneurs.

Yet enough development is happening that the German Aero show will have a show-within-a-show, the e-flight-expo. Says German publisher and co-organizer of the event with Aero management, Willi Tacke, “At this moment we have a dozen trend setting exhibitors to participate at the first e-flight-expo April, 2-5, 2009.”

I’ve written about electric projects: Electra Flyer/others and Sonex. The newest entry involves one of my all-time favorite airplanes, the Earthstar Aircraft Gull 2000. This ultra-light single seater flies efficiently on a very small wing, so when I spoke to Mark Beierle recently I got excited when he told me he’s working on the eGull. Mark is a remarkably talented and creative designer; his airframe could be a great platform for such a powerplant. While eGull is a single seater, two seaters will follow early development. Meanwhile, I look forward to a flight in an electric powered Gull 2000. Bring it on, Mark!