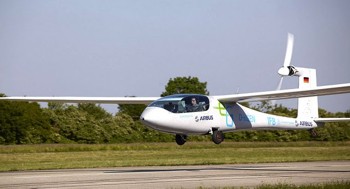 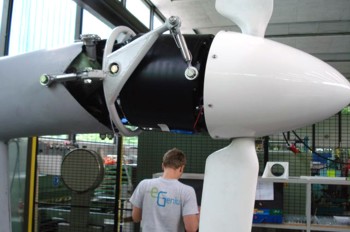 A crack team of aeronautical whizbrains in the Institute of Aircraft Design at the University of Stuttgart, Germany has just passed its second important milestone in less than two months: its electric aircraft eGenius just flew more than two hours at more than 100 mph. *** Not by coincidence, that’s exactly the kind of performance that will be required to take $1.3 million top prize in the recently postponed (until September 25) CAFE Green Flight Challenge.  *** The GFC will award the prize money to the aircraft that can fly 200 miles at greater than 100 mph on the equivalent of one gallon of gas per occupant. The per occupant proviso is significant…and EGenius carries two people, so it can use enough batteries to store two gallons worth of energy.  *** That’s a lot of batteries given the current relative inefficiency of energy storage of batts vs. gas, but it appears that hurdle has been overcome, and rather handily, since there was apparently several minutes of charge left after the record-breaking flight.The eGenius, funded by Airbus, is an electric motorglider, with the requisite high-aspect wing (55 feet). It’s powered by a 60 kW (80.5 hp) motor, installed in the tail to drive a larger, more efficient prop. The battery pack can stow 56 kWh of energy. *** Flight profile included a climb to 4000 feet and an out-and-back between two nearby towns. Total distance was 211 miles, a world record for electric flight. *** This on the heels of its maiden flight in May. *** If the other entries (12 at last count) in September’s GFC big-money event aren’t shaking in their boots yet…they oughta be. It’s a stunning development and augurs well for advancing the technology by at least one leap and bound…the point of the contest in the first place. *** Let me say it again: Wow!