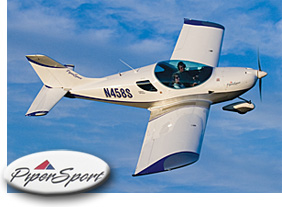 For just one year Piper added their logo to the SportCruiser, calling it PiperSport. It sold well. 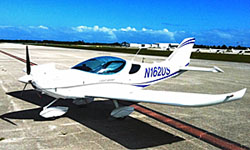 Especially configured and priced for flight schools is the SportCruiser Classic model. 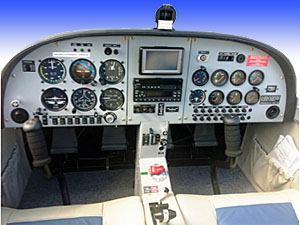 With the traditional “six pack,” plus Garmin‘s touchscreen aera and radios, the Classic can work well in a flight school.

In the year following Piper’s departure from the LSA market, you may have expected a big slow-down for importer U.S. Sport Aircraft (USSA). Many believed the removal of the Piper brand would cause a loss of loyalty and that sales would flat line. *** Those people may have forgotten how well the SportCruiser did before Piper got involved. The dark forecast turned out to be wrong thanks to hard work by USSA boss Don Ayers, Donato Martino, and their staff. SportCruiser models have logged 20 registrations in nine months of 2011, a performance that keeps them high on our Market Share Chart even as Cessna has zoomed upward. Now, the Florida company has a new model and a new man to help promote it. *** USSA President Don Ayres announced a new model of the Czech Sport Aircraft SportCruiser positioned as an affordable training aircraft. “The majority of our customers have transitioned from Cessna and Piper aircraft not because it fits in the Sport Pilot category but because the SportCruiser offers a more exciting experience at significantly lower hourly operating cost when compared with traditional aircraft.” Flight schools value lower costs, too. *** The SportCruiser Classic features the good performance and handling of the regular SportCruiser and is equipped with a traditional 6-Pack of analog gauges — attitude indicator, heading, altimeter, airspeed, rate of climb, and turn and bank — plus analog engine gauges (photo). Avionics on the Classic include a Garmin SL40, Garmin Aera 500 GPS, Garmin GTX 327 Transponder and a PS Engineering PM 3000 Intercom. Adjustable rudder pedals with toe brakes, electric pitch and aileron trim and an Ameri-King AK-451 ELT are standard equipment on the Classic. *** USSA set an introductory price of $119,500, which includes transportation and document charges, FOB Ft. Pierce, Florida or Dallas, Texas. The importer operates multiple locations to better serve customers. USSA plans to bring their new SportCruiser Classic and a new Dynon SkyView equipped SportCruiser SVA to Sebring. “We have several planes, including a few PiperSports in stock and available for immediate delivery,” stated Ayres. *** To spearhead sales of the SportCruiser Classic (and other models) to flight schools, USSA has added Bob Anderson to their staff. Anderson is a veteran of LSA sales and previously a flight school owner also known for specializing in LSA aircraft used in flight training. He worked with SportCruiser before Piper jumped in, then departed to lend his experience to the Remos organization for a period. “After a year on the beach I finally found a home in LSA back where I started, with the SportCruiser,” said Anderson.