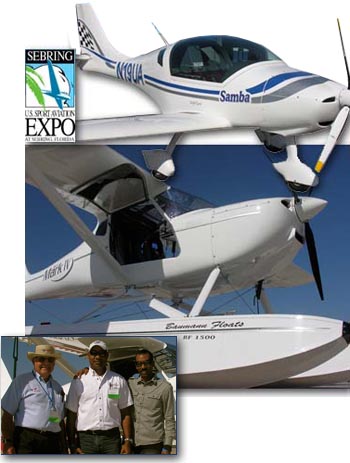 What to the following events have in common? …Sebring LSA Expo, Heart of Texas LSA Expo, Midwest LSA Expo, Sport Pilot Tour… Answer: All are focused marketing shows generating keenly interested crowds to examine Light-Sport Aircraft. When that happens, business arrangements sometime result, and not all deals are between airplane buyers and sellers. *** At the Sebring LSA Expo FK Lightplanes USA struck an agreement with Hansen Air Group. The latter, an Atlanta-based national seller of the Sky Arrow and new FP-04 Peregrine, signed on to represent the Fk9, seen in Florida atop Baumann BF-1500 floats. One aviation family helps another as FK’s father-and-son Tony and Adriel Anderson linked up with twin brothers Jon and Ron Hansen. *** Recently I attended an open house for another mini-conglomerate in light-sport aviation based at the Melbourne, Florida airport. U.S. reps for Evektor and Urban Air have teamed up, sharing a hangar and a common president, Josef Bostik (who additionally runs Magnum Ballistic Parachutes). They also invited Advanced Aero and their inverted V-tail concept aircraft to join them. *** Also at Sebring, LAMA announced it had signed Memorandums of Understanding with several leading experts to help the industry trade organization deliver on its promise to provide third-party auditing to 68 companies presently building LSA.