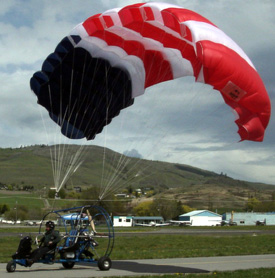 Summit Powered Parachutes beat a group of companies working toward the first Special Light-Sport Aircraft PPC. The Vernon, British Columbia, Canada-based powered parachute producer won their SLSA Airworthiness Certificate on Thursday, April 27, 2006. I flew and reported on the Summit II in the 11/03 edition of Ultralight Flying! Magazine. I found Summit II to be notably different than most other powered parachutes partly due the sliding rudder pedal-like foot controls used to steer the canopy that exhibited fluid action. Last November Summit won German certification in the only such approval by an American company with which I am familiar. This earlier certification may have helped Summit as they prepared for stating compliance to the quite different ASTM standards. Although the powered parachute standard has been done for many months, those producers have not rallied to the new regulation. All that may change now that Summit is out of the gate with their approval.