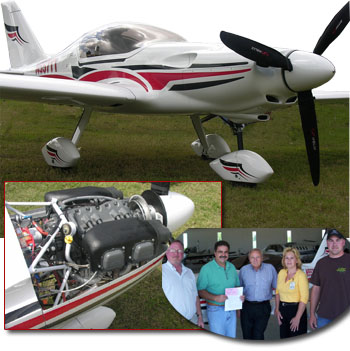 The original Corvus had features that didn’t make it into the SLSA Falcon LS (a power-opening canopy with remote clicker for example), but it kept most of the handsome lines of the former. It has that go-fast look even while sitting at rest. Click for more specs.

Perhaps it’s the race to get ready for AirVenture 2008. Perhaps it was simply the result of months of work which finished right before the big show. Either way, welcome our newest SLSA, the Falcon LS. *** You first became aware of this airplane as the Corvus
, seen at the Aero airshow in April 2005. The gorgeous Hungarian design was created in a country lacking a bilateral agreement, government-speak meaning it could not be exported to the U.S. as a ready-to-fly LSA. So, Tomas Becse and Thomas Pizzuti — the twin Ts of T&T Aviation — are using the basic design and doing assembly in the USA to bring the shapely low wing to American customers. *** Other than Jay Kurtz’s Experimental LSA RV-9, Falcon LS is the first Light-Sport Aircraft to offer the 116-hp Lycoming O-235 (photo) as a powerplant. T&T also offers the Continental O-200, Rotax 912S, or Jabiru 3300, so you have a wide choice of powerplants. Though slightly slower than the LS with other engine choices and though heavier (empty weight increases to 828 pounds, 60 more than with the Rotax), some general aviation pilots might choose the Falcon LS solely for this reason.