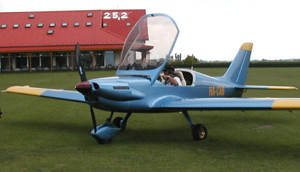 Corvus Aircraft builds the shapely Mk 3 using Kevlar, carbon fiber, and fiberglass, an exotic combination that yields plenty of useful load. The side-by-side two seater also boasts a distinctive instrument panel that lifts up with the canopy to ease entry.

Most Yankee pilots couldn’t care less about an arcane government agreement. But if you like the looks of the Corvus Mk 3, the Bilateral Aviation Agreement (BAA) becomes important. The stunning Corvus, which I first saw at Aero 2005, is built in Hungary meaning Corvus USA requires the BAA before offering it as a SLSA. That’s precisely why Jesse Martin, proprietor of Corvus USA, attended a conference with the catchy name, “2006 US/Europe International Aviation Safety Conference.” At this event, Jesse heard that the BAA is being negotiated between FAA and EASA, Europe’s EU-wide aviation agency. He reported, “This agreement [will] incorporate member countries of the European Union…to create a single agreement for all 25 EU members,” including Hungary. He added, “The best guess for ratification of this agreement is mid-year 2007.” *** Why should this interest you? Besides the handsome Corvus, other intriguing designs might also be available to U.S. Sport Pilots if all EU countries are allowed to export to the U.S.