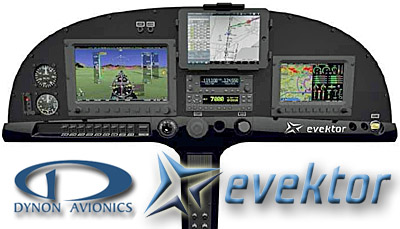 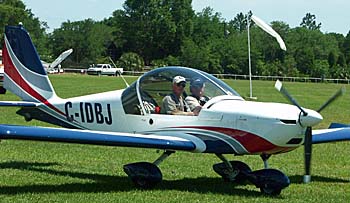 The very first aircraft ever to receive approval in the USA as a Light-Sport Aircraft is Evektor-Aerotechnik’s SportStar. No challenger can ever take away that title yet the company has continually developed this pioneeering airplane and recently achieved a new level of approval … one that alters the landscape in a way I predict we’ll see more as FAA’s Part 23 rewrite project progresses. “Following several months of certification process EASA has approved glass cockpit Dynon SkyView [as] SportStar RTC,” Evektor announced. RTC stands for Restricted Type Certificate. It is not identical the U.S. Part 23 Type Certificate — representing a somewhat lower level of government oversight — but a company earning this has to jump through many regulatory hoops. “SportStar RTC has become the first EASA certified aircraft approved with the SkyView glass cockpit [by proving] compliance with certification requirements of the EASA CS-LSA regulations. Dynon’s SkyView, recently upgraded to permit touch functionality, is widely known and used on Light-Sport Aircraft.

The first SportStar RTC with Dynon‘s SkyView will be delivered to France [and put into service by] Air Club Les Alcyons, one of the biggest clubs in the Paris area. Along with gear from Dynon and Garmin, Evektor said, “The aircraft will have also Apple’s i-Pad Mini installed, bringing extended convenience and functionality in the cockpit.” All these components from LSA stalwarts Dynon and Garmin are increasingly paired with Apple’s ubiquitous tablet computer used in many industries and widely employed throughout all levels of aviation from airliners to ultralights. “With the advanced SkyView glass cockpit, ballistic recovery system, low operating costs and excellent training platform the SportStar RTC represents the most innovative solution for air clubs and pilot training organizations on the global market today,” added Evektor. A top-ranked supplier to the U.S. market Evektor also does well overseas, reporting more than 1,300 aircraft have been delivered. Evektor has solid American representation through Dreams Come True and AB Flight.

As everyone headed to Oshkosh for AirVenture 2014 finalizes their packing and preparations, one historically significant Light-Sport Aircraft is doing likewise and may, just possibly, appear at the space EAA has provided for the 10th Anniversary Celebration of SP/LSA. Evektor owner, E. W. Rogers wrote to offer this: “I am flying a SportStar to Oshkosh this year … it is the first one sold in USA, and has about 800 maintenance-free hours on it.” At the EAA space near the newly renamed Boeing Plaza, look for the special EAA space, which will have at least 17 aircraft on display, including most leading brands of Special LSA plus weight shift, powered parachute, gyroplanes, and some “vintage” aircraft that Sport Pilots may fly. ••• Those going to Oshkosh may also want to attend a forum about the decade-old sector on Tuesday July 29th from 1:00 to 2:15 PM in Honda Forum Pavilion 7. The presentation will feature EAA boss Jack Pelton; FAA honcho Earl Lawrence; original FAA rule writer Ron Wojnar; industry leader Tom Peghiny of Flight Design USA; Rotax engine expert Eric Tucker; FAA Sport Pilot specialist Mark Giron; and … yours truly.