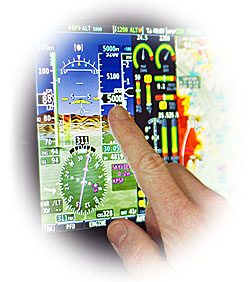 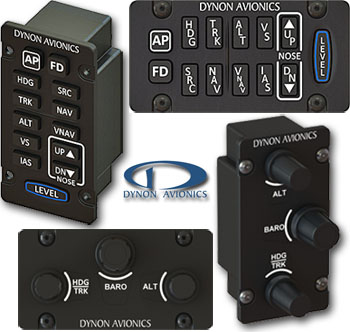 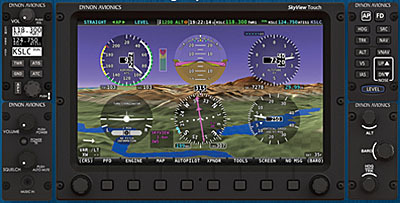 Dynon’s virtual six-pack treatment may ease transition for those who learned to fly instruments with analog gauges.

With the chance to fly and learn both Dynon SkyView and Garmin 796, I have become a fan of each. Dynon is dominant in Light-Sport Aircraft instrument panels for very good reasons. They work well and don’t cost an arm and a leg. Their Synthetic Vision is superb. However, much as I have come to love those big, beautiful, all-color digital instruments, you must resort to a button or joystick to make changes. Those of us spoiled by our smartphones and iPads have become accustomed to touch. So, no wonder that I also fell in love with the all-touch 796. It works a lot like my iPad and finding things is reasonably easy … a few functions are hidden behind menu layers but on whole, the 796 is a brilliant bit of engineering design. However, in bumpy air, I’ve had to learn a technique of hanging a thumb or finger on the bezel to steady my hand as I try to select certain functions by touch. In short, touch isn’t always optimal. Dynon has heard all this and has been busy. Just in time for viewing at Sun ‘n Fun, the digital geniuses at Dynon have introduced SkyView Touch™. Michael Schofield, Marketing Manager at Dynon Avionics, says: “We’ve focused on creating an incredible pilot interface with SkyView Touch™ and new dedicated control panels. From the simplest LSA to the most complex IFR aircraft, there’s a SkyView for every panel.”

To solve the bumpy touch dilemma, Dynon built a combination interface of either touch or buttons and knobs. They say SkyView Touch is designed to complement not replace physical controls. In essence they added the convenience of touch when you want it but kept a full set of buttons and joystick knobs for precise control in turbulent conditions. Plus, “Unlike most touch-based avionics and tablets, SkyView Touch preserves SkyView’s sunlight-readable and glare-rejecting screen.” Finger pinch and spread motions made natural by using iPads and smartphones will now work on the SkyView map. Also, tapping part of the screen display that includes an adjustment bug directs the action of the joystick control to that bug. OK, so we all love touch, but what about flying around in bumpy air? That Garmin 796 I’ve come to love isn’t quite as friendly in turbulence. Dynon also heard that and the nearby photos illustrate their solutions: they made separate physical-knob-&-button control panels. Schofield explained, “The Knob Control Panel has dedicated controls for the most-frequently adjusted items: altitude bug, altimeter setting (barometer), and heading & track bug. The Autopilot Control Panel provides single button activation of all autopilot modes, including Level mode and flight director. It has a built-in two-axis speed-sensitive trim controller. Both products are backlit, dimmed by SkyView, and available in horizontal and vertical versions.” The Knob Panels can be added to any SkyView for $250 and the Autopilot Panel can likewise be added for $550.

For those worn out by smartphone envy — meaning you want the newest features but are locked into your old contract — Dynon offers a retro-upgrade. SkyView Touch retails for $3,995, only $395 above the non-touch 10-inch display. Yet existing SkyView customers (the bulk of LSA owners today) won’t have to cope with upgrade envy. That’s because all current SkyView SV-D1000 displays can be upgraded to touch for only $795. The new hardware and software will be available in April 2014, said the Woodinville, Washington company. Another modestly priced option is the availability of geo-referenced VFR sectional and IFR charts right on your SkyView for $99 a year, including IFR/VFR procedure charts (plates), VFR sectionals, IFR Lo/Hi charts, and all FAA and Flight Guide airport diagrams. One more thing … A few months back, we reported results from an AOPA survey that showed nearly three quarters of general aviation aircraft still use round analog instruments. Many pilots — yours truly included —- learned to fly instruments with a “six-pack” of “steam gauges.” These modern flight directors, HSI displays, and airspeed or altitude “tapes” are something to learn. Using them gets easier with practice but they aren’t instantly familiar. Michael added, “Pilots new to glass can transition with ease using SkyView’s new primary flight instruments display. Familiar analog dials are available with the classic ‘retro’ instruments.” Users can switch between six-pack and EFIS display instantaneously. Perhaps the best news: “Six-Pack mode is included in the upcoming free SkyView 10 software update.” No wonder folks love Dynon.

Still not satisfied? Luckily, Dynon’s SkyView 10 software has even more for you including the following list:

Ability to filter the nearest airport list by runway length, surface, and airport type
ADS-B winds aloft forecasts
Vertical Speed Required info item on the map and VSI tape gives the pilot quick insight about the descent rate needed to reach an adjustable point above/before the destination
Engine instruments can now be livened up with new color options, including blue, white, violet, cyan, and orange
Audible landing gear alerts based on aircraft configuration and airspeed
Airspeed-triggered “gear up for water” / “gear down for land” audible alerts for amphibious aircraft