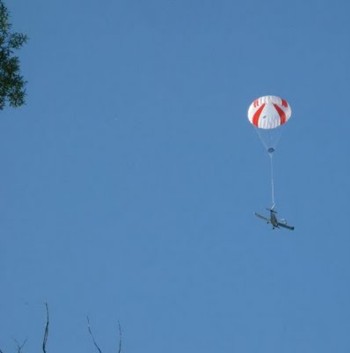 An Evektor SportStar under canopy and descending to the water. 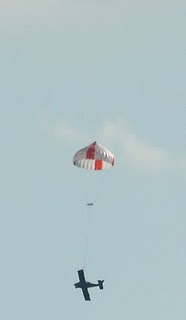 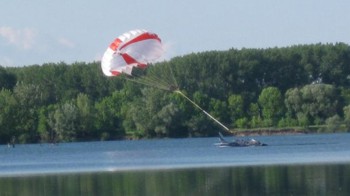 Note pilot in water to right of sinking airplane. 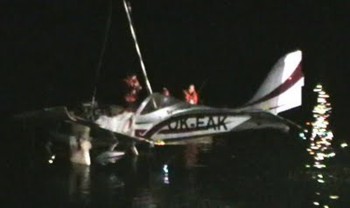 The SportStar about to be hoisted to shore by crane

An
anonymous source sent me an account (in Czech) and photos of an incident in Czech Republic that reportedly occurred when an Evektor SportStar, flown by an “experienced pilot”, was unable to recover from a spin.   *** It happened on May 18 over a lake near Ostrozska ​​Ves.  You can see the pilot climb out of the cockpit once it hit the water, before the aircraft sunk. *** These are some of the best photos I’ve ever seen of an actual deployment, rivaling the YouTube video of an Argentine Rans pilot doing aerobatics and suffering a wing loss in negative G yet was saved by the airframe ‘chute at an extremely low altitude — a real heart stopper, that one.  *** The Czech ambulance staff called to the scene treated the Evektor pilot for bruises and exposure. He was otherwise uninjured… very good news! *** Because Lake Ostrozska is an important source of drinking water for a large surrounding population, there was considerable concern that the 17-plus gallons of gas still onboard might escape from the plane and kick off an “environmental disaster,” according to an online Czech news source. *** But the coolheaded pilot reportedly shut off the fuel as the aircraft descended under canopy. *** Police divers from Brno located the wreckage underwater around 7:30 that night about a quarter mile offshore, then used inflatable bags to gradually raise the aircraft to the surface and bring it closer to shore. *** Around midnight firefighters called in a crane to lift the plane and swing it to land. Accident investigations by Czech Republic’s equivalent of the NTSB are under way. *** The report goes on to say Evektor staff immediately began to disassemble the machine and transport it to the nearby factory. Marketing Manager Vit Kotek is quoted as saying,  “I will follow the investigation. The plane looks almost undamaged.” *** He noted this is the first such event for an Evektor. An airframe parachute is standard equipment on the SportStar, which has been extensively spin tested according to company sources. I’ve queried the U.S. distributor for comment on the accident, but he’s still digging for info and hasn’t reported back yet. *** Whatever the problem with the airplane or its pilot turns out to be, here’s yet another compelling case for the value of airframe parachutes to save lives after unforseeable or unavoidable peril.