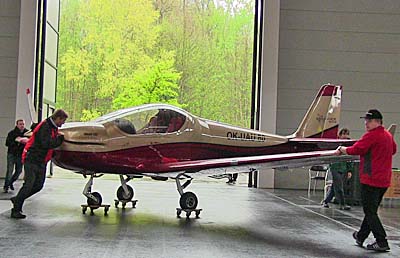 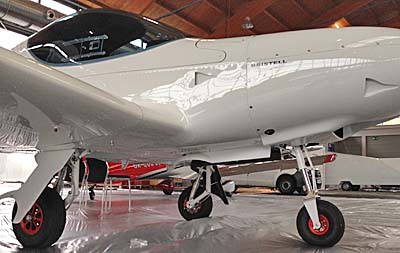 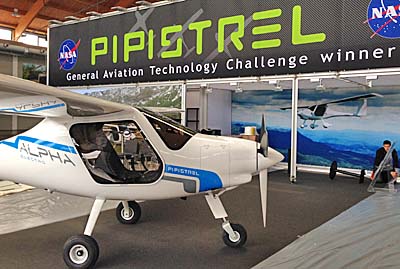 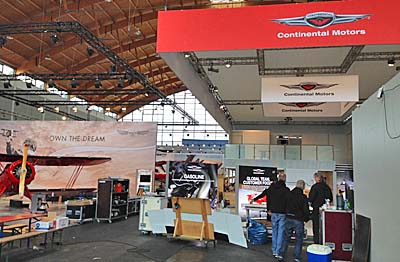 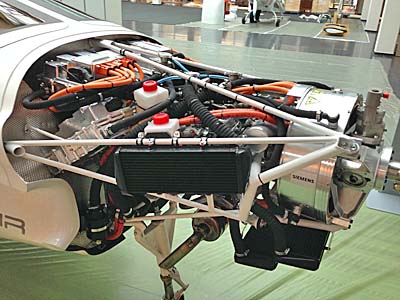 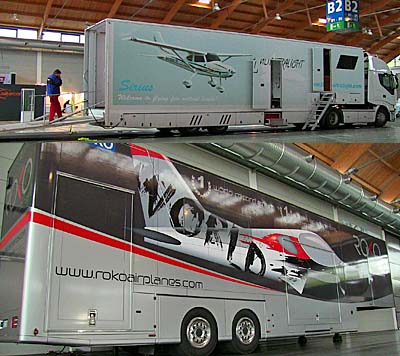 The great show of Europe called Aero Friedrichshafen is about to begin. It starts officially tomorrow and runs through Saturday (April 20-23, 2016). I’ve lost count, but believe this is my 20th year of attending, far more than any other European show. As he worked to help exhibitors and manage the million details of his event, boss Roland Bosch said the event started in 1977, meaning next year would be its 40th, but… Aero alternated years from 1977 through 1991 (as do many European airshows). With the 1993 event it went annual, meaning this is the 31st Aero.

On Monday, the vast 11 halls of the Messe (the facility name) were largely empty but slowly becoming populated with airplanes. In all of the gymnasium-sized halls with their elegant curved wood roofs, workers assembled displays. In Halls B1, B2, and B3 — where the light aircraft I follow are concentrated — displays are more elaborate than anything we typically see at U.S. shows. However, in the A-side halls, displays are magnificent, much like what one sees at the National Business Aircraft Association events (see Continental booth photo below.)

I enjoy observing the set-up effort. I’ve gone to many airshows and I am always amazed at this: on the evening before the show opens, chaos appears to reign. I can envision no chance it will all be ready in time. Yet, hours later as the entrance gate opens, booth spaces (called “stands” in Euro-English) seem completely finished, serenely awaiting the rush of first attendees. It’s a marvelous transformation I’ve witnessed again and again.

As they set up their spaces, aircraft can be seen before they are dolled up for public consumption. I caught the retractable version of the BRM Aero Bristell. We may not see this airplane in the USA as the Light-Sport regulations don’t permit retractable land planes (though, obviously, amphibious LSA seaplanes use what was once called “repositionable gear.” I’m guessing this Bristell is quite a speedster that likely exceeds LSA’s 120-knot speed limit in America.

Pipistrel, as you will read in my market share post to follow, continues to move up the U.S. LSA market ranking and this company refuses to sit still. Today, an announcement boasted that their Virus SW 121 has achieved full EASA type certification. A limited number of other LSA producers have earned a Restricted Type Certificate (RTC) for their aircraft; Pipistrel noted theirs is not that but unrestricted approval by the European Union’s equivalent to the FAA.

While Pipistrel charges (pun intentional) off in all directions, they chose to feature their Alpha Electro prominently in their booth space or stand. The company has already delivered a few of these pure-electric-powered Light-Sport-like aircraft to flight schools that use them for pattern flight training. A quick swap of batteries to keep one set charging can theoretically allow for very economical, and quiet, operations. An American company is doing likewise with their Sun Flyer project but has some ways to go to catch up with Pipistrel.

Over in the A halls, specifically in A-3, we see engine producers like Rotax — right up front in the highest traffic area — and Continental Motors, now also of Titan fame (the much-appreciated sponsor of our new video in the header above). In the A halls, visitors will find a dizzying array of flying products but also the biggest airplanes at the show. Along with their larger size, these companies mount impressive displays, like the two story-exhibit workers were assembling as I poked around early in the process. Along with their GA engines and their diesel entry, Continental displayed their Titan engine that has found favor on so many LSA in America. Company marketing guru, Emmanuel Davidson, said Continental will have some major announcements on opening day and I’ll be present to hear items of interest to readers of ByDanJohnson.com.

When I first started attending Aero, it was not in these giant halls. The new Messe was built after Aero began. In the first year I attended, the largest aircraft on display anywhere was a Cessna 206. Today, jets and big business aircraft are very much a part of the overall event, though I spend most of my time with the smaller aircraft that are my focus. The little guys cannot all afford to be present every year so this even-numbered year will not see the sailplane displays. Some LSA producers also don’t come annually (for example, Tecnam will not be present) to preserve funds for other marketing expenses.

Positively electrical and a glimpse of the future is how you might describe exhibits in the e-flight-expo.

The Slovenian company Pipistrel, with a facility in very nearby Italy — where it finishes Light-Sport Aircraft intended for export to the U.S. (a necessity due to government requirements) — is one active outfit. In the e-flight-expo area, in the large entry foyer on the west end of the giant complex, Pipistrel was preparing a mock-up of their supersleek four seater called Panthera with a hybrid electric propulsion system.

The e-flight-expo, significantly arranged by my publisher friend, Willi Tacke of World Directory of Leisure Aviation (WIDOLA) fame, was setting up to show off the technology achievements by enormous corporations like Siemens (supplying the motor on the Panthera mentioned above) and tiny companies, those enterprises that often lead the race in new innovative directions. I plan to spend some time in the entry foyer looking over the achievements of these companies. We don’t know that electric propulsion, or hybrids, will truly arrive on the aviation scene anytime soon, but plenty of folks are rooting for such, including myself.

One thing you will not see, as the show opens on Wednesday, will be the giant semi-tractor trailers that hauled in the merchandise. In the nearby view you see the enormous dual, tandem-wheeled trailer holding Roko airplanes (a company once associated with the aircraft now produced by BRM Aero, builder of the Bristell series). American companies have more modest funding, normally using trailers or flying their aircraft to events. Not all Europeans are so well-heeled either, but some have major hauling vehicles. The custom-built rig used by TL Ultralights was steadily being unloaded of aircraft and display equipment as I snooped around on Monday, two days before opening.

When Aero open on Wednesday the 20th, I will continue my investigation of all things marvelous in light aircraft. I hope to capture some video material for later editing by Videoman Dave and I hope to post daily stories about cool aircraft and flying gear ideas I find. Stay tuned. This is going to be as interesting as ever, I predict.