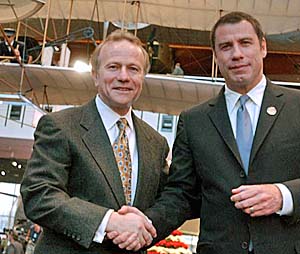 Moving among the glitterati, Tom Poberezny got to meet celebrities with an aviation interest such as John Travolta. 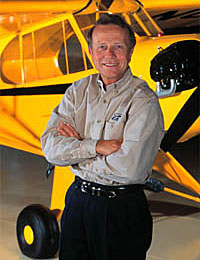 Following his father’s ground-breaking work, Tom preserved support for the “51% rule” and promoted the SP/LSA regulations. 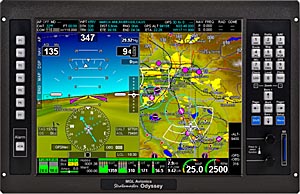 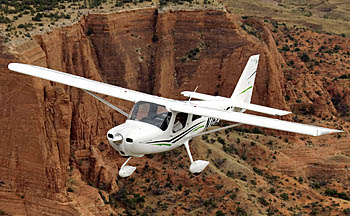 Cessna says Skycatcher has “No future.”

Once upon a time, way back at the dawn of LSA — 10 years ago come next Oshkosh — I consulted to EAA about the then-new emergence of Sport Pilot / Light-Sport Aircraft. In those days, Tom Poberezny was running the show. In 1989 he took over from his dad, affectionately known to some as Pope Paul. By then, Tom had been a major figure in aviation for many years. When I worked inside EAA HQ during 2004 and 2005. I often had the pleasure of meeting with Tom and occasionally his wife Sharon. I can’t say we became good friends, but we got to know each other and we both wanted great things for aviation. Zap ahead to AirVenture 2011 when a troubling thing happened. As since-departed Rod Hightower took over as President of EAA, the organization appeared to abruptly shove Tom to the sidelines. About the same time, Phil Boyer left the top job at AOPA and the contrast could not be more sharp. AOPA made big celebrations of Phil and welcomed then-new guy Craig Fuller. It was a smooth, professional transformation. Contrarily, EAA leadership appeared to virtually discard Tom hardly stopping to recognize his years of service. I found it regretful, and a missed opportunity to promote EAA. Beyond opening day of the big show, Tom was no where to be seen.

Time for a fixer upper. Led by an old PR friend, Dave Gustafson, a new group has formed around a website and the purpose of honoring Tom Poberezny. The group pushing this plan is a who’s-who of aviation, including: Dick VanGrunsven (RV designer), Jim Irwin (Aircraft Spruce), Dale Klapmeier (Cirrus), Frank Christensen (Eagle), Burt Rutan (SpaceShipOne and Scaled Composites), Bob Hoover (airshow legend), Jeremy Monnett (Sonex) and more. Along with daily management of EAA, Tom oversaw the funding, design, and supervised the construction of the world-class EAA museum. He initiated the Young Eagles program, the world’s most successful program for introducing young people to aviation. He led EAA’s support of the Sport Pilot license and the LSA category, and he preserved the 51% rule governing EAB aircraft. “A more complete list of Tom’s accomplishments can be seen at the Honor Poberezny website“, noted the group. “You might find some surprises on that list.” Gustafson and organizers ask that those similarly moved should “sign our Roster of Support online” and to join in the celebration at AirVenture 2014.

••• AOPA recently ran a survey asking readers of their eBrief about the equipment in their airplanes. Those of us who commonly fly Light-Sport Aircraft have gotten used to — and even depend on — glass cockpits, meaning we have one or more computer screen instruments. In my experience the appearance of round dials, affectionately known as “steam gauges,” is increasingly rare. Many LSA in which I get to fly have no round dials … not a single one. With multiple back-ups to the digital readouts, who needs them? However, that’s not the case in general aviation aircraft. AOPA asked what their readers are using their cockpits and here’s the answers:

••• Finally, It appears Cessna is no longer promoting their Skycatcher LSA. Indeed we saw their deliveries grind to a halt and even with several dozen aircraft in various states of readiness on ramps around Wichita, the aviation giant has made surprisingly little effort to sell them. According to Aviation Week online’s “Things With Wings” blogger Joe Anselmo, “Cessna President and CEO Scott Ernest is signaling that Skycatcher, the company’s low-cost, Chinese-built light-sport aircraft, has been relegated to the history books. ‘There’s no future,’ Ernest said when asked about the aircraft at a Cessna press conference October 21 at the NBAA convention in Las Vegas, Nevada. Asked if that meant the project would be discontinued, he replied, ‘No future.’ Skycatcher was launched six years ago with great fanfare by Ernest’s predecessor, Jack Pelton. Offered at an introductory price of $109,500, the aircraft attracted 720 orders worth more than $75 million in the first three weeks after launch, and backlog ultimately topped 1,000. But the project was bedeviled by manufacturing problems at its Chinese partner. Cessna also was forced to raise Skycatcher’s price, which caused its backlog to evaporate.”