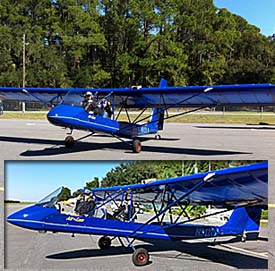 Air-Cam N912LA looks (and is) completely airworthy after suffering major damage in the Tornado that hit Sun ‘n Fun 2011. photos by Randee Laskewitz 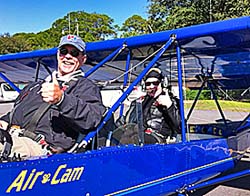 For most, like passenger and friend Pat Lehotsky, flying in an open cockpit airplane is extremely rare; a tiny fraction of the population will ever experience anything like this. photo by Randee Laskewitz

Fall at Jekyll Island was much better for Air-Cam N912LA than spring at Sun ‘n Fun, where a Tornado turned the twin-engine aircraft into a pile of tubes and fabric. 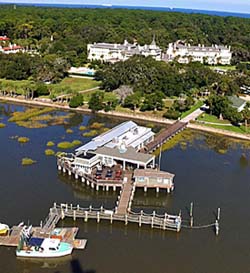 My good friend and Air-Cam developer, Phil Lockwood, likes to hold fly-outs for his customers. More than 160 kits have been delivered and built; each fly-out has attracted several of these owners. Phil and his Lockwood Aircraft associate George Weber have invited me several times but I’ve had to miss earlier gatherings for owners of this iconic “twin engined ultralight” (it isn’t really an ultralight but has its roots in that category). For once I got to attend. The destination was the beautiful Jekyll Island resort area of Georgia; it’s near St. Simons Island, another popular vacation destination. *** On a stunningly beautiful day, I was privileged to take my wife and two friends aloft for 30-minute tours of the Island. This was great fun for all. But what made it especially interesting is that I did this in N912LA, one of three Air-Cams badly trashed by the tornado at Sun ‘n Fun 2011 (photo). In an effort typical of the hard-working staff at Lockwood Aircraft, this and two other Air-Cams were returned to flight after looking like a crumpled pile of tubing and fabric. *** The Air-Cam is neither ultralight nor Light-Sport Aircraft but it acts like either one in some ways. For touring an idyllic setting like Jekyll Island, Air-Cam allows what you would be unlikely to do in any other airplane with which I’m familiar. Air-Cam, in which I obtained my multi-engine rating, flies so well on a single engine that you can fly low over marsh lands or stray over the ocean in near-certain safety. I have successfully taken off (solo) in Air-Cam with one engine at idle thrust; this is something you never consider trying in other twin-engine aircraft. If you lose an engine in flight at almost any attitude or altitude you can barely discern you’ve lost an engine, far different from the workout most twin-engine aircraft will give you after an engine quits. *** Air-Cam is so confidence inspiring at 50-200 feet off the surface that such becomes the standard cruising altitude on site-seeing missions as we flew over Jekyll. We literally had to climb to cross bridges, to allow the safe altitude mandated by FAA while flying above people on the surface. We also climbed to enter pattern altitude… yes, climbed. These amazing flight capabilities are backed by Lockwood’s legendary maintenance. I’ve known Phil for decades and if he says an airplane is right, I ask no more questions. His word is gospel in matters of maintenance. *** Not only was the flying experience wonderful, we discovered those Air-Cam’ers really know how to pick excellent destinations. We stayed in the Jekyll Island Club hotel, an early 1900s facility kept in marvelous repair. It was pricey but worth the money. Twice we dined at hotel restaurants for some of the tastiest food any of us has enjoyed.