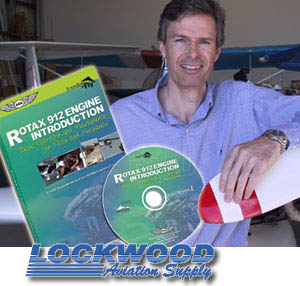 Rotax Aircraft Engines power 87% of the SLSA fleet (by model count, not units sold). Of the top-selling 20 SLSA companies, only 4 (Legend, CubCrafters, Jabiru, and IndUS) use a non-Rotax brand for 23% of sales. Phil Lockwood stars on ASA’s Rotax 912 DVD by Paul Hamilton.

A&P acceptance (or lack thereof) is a leading reason for Cessna’s decision to use the Continental O-200D in Skycatcher. Surveys through their Cessna Pilot Centers showed that a majority of FAA-licensed mechanics preferred an engine they already know. Most lack knowledge of the Rotax 9-series that powers the majority of the LSA fleet. And when an expert knows little about a new product, human nature compels him to resist. *** Trying to educate A&Ps on the best-selling LSA engine is one task of Rotax service center operator, Phil Lockwood. This winter, he’ll be giving hourlong presentations for A&Ps (and owners), trying to encourage to A&Ps to take a pair of two-day courses to bring them up to speed with the Austrian engines. *** Of 62 presently approved SLSA models, only 8 (13%) use another engine (Continental or Jabiru). Starting in 1973 with the ultralight market, Rotax has produced more than 125,000 aircraft engines. The parent company behind Rotax Aircraft Engines produces 200,000 engines annually for personal watercraft, all-terrain vehicles, snowmobiles, motorcycles, and karts as well as aircraft. Of this production, 70% are four stroke. Hear Phil’s FAA talk…or Sebring Expo talk.