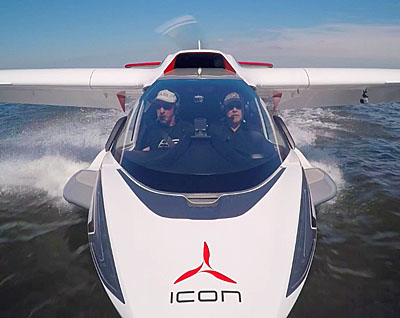 Your author finally got a chance to fly the Icon A5 at AirVenture Oshkosh 2015. Watch for an upcoming Video Pilot Report on this warmly-received LSA seaplane. 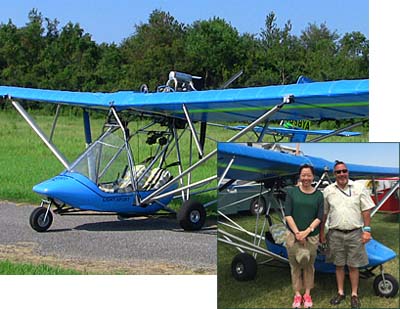 M-Squared’s Breese 2 powered by a Rotax 912 flew many demo flights and drew the vice mayor from the Chinese city of Anyang who visited AirVenture with a delegation. 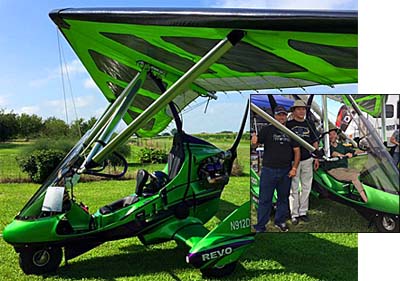 The ultra-deluxe Revo trike flew an impressive number of demo missions. The Chinese group see interest in weight shift aircraft in their country and paid a visit to Evolution Trikes’ display. See plenty of activity on a fun video found on Evolution’s Facebook page (August 17, 2015 post).

Shows like Sebring and Midwest LSA Expo are known for being great places to demo fly a Light-Sport or light kit you may be considering to buy. They earned that reputation because it is typically much easier to fly at those lower-key, less crowded events than at giant shows like AirVenture. However, some companies make demo flying a mission at Oshkosh and this article covers three that delivered an exceptional number of demo flights.

Icon reported doing around 150 demonstration flights in the first public outing of the long-awaited LSA seaplane. Writers for aviation’s largest magazines got their private crack at the new bird beforehand … since returning from Oshkosh, I’ve seen A5 on the covers of Flying, AOPA Pilot, Sport Aviation, and Plane & Pilot. That’s an enormous splash. I can’t recall any single aircraft capturing all four titles in the same month, quite a credit to Team Icon for deftly executing such a major marketing push.

Once arriving in Wisconsin, Icon made sure many their owners-in-waiting got a chance to fly the bird they hope to own before long. Interspersed among them, more aviation journalists got their chance. I had to bide my time until near the end of the week due to an intense schedule and a couple days of less than ideal weather, but I finally got my shot at the much-talked-about LSA.

Icon staffers were very accommodating, even mounting four GoPro cameras on the A5 in which I flew with ex-military jock and now Icon’s vice president of sales and marketing, Craig Bowers. Look for our coming Video Pilot Report as soon as the video editing can be completed. Icon did their demo flying off-site where they could better control the experience. A group of perhaps 15 personnel moved people in and up in a pair of A5s with some staffers first briefing each pilot while others took care of fueling, taking photos, assisting the water docking and more in the expert fashion we’ve come to expect from the California company.

Next we move to a man I anointed as the “Demo King” of AirVenture in previous years thanks to his amazing performance at getting people aloft from the Ultralight Area runway at Oshkosh.

Compared to Paul Mather of M-Squared Aircraft, Icon is a Johnny-come-lately to this activity. Beyond making SLSA and kit versions of his Breese line, Paul is also a DAR (Designated Airworthiness Representative) who assists others with getting approval for their Light-Sport Aircraft. He is very knowledgeable and very experienced.

Paul reported, “We flew 98 fights, about ten of which were to area volunteers; through these flights, we put 9.8 hours on our 912-powered aircraft.” Paul has always been gracious about getting hard-working volunteers a chance to see their area as a form of reward for their hours of unpaid work. He added, “We also did two photo shoots for EAA.” He explained that the photography missions were done with an automatic camera that captured more than 3,000 pictures, at least one of which EAA used in giant size in the main area of the event. “The automatic camera was operated by a subcontractor from National Geographic magazine.” He was a very large fellow further proving the strength of Paul’s open cockpit airplane. “His fisheye lens took in almost the entire field at Oshkosh,” Paul added.

Paul was member of our travel delegation to China, where he found sales for his M-Squared models. Of our group, he was one who had earlier experience in this part of the world. His flying machines may fit an emerging aviation market due to very reasonable prices (less than $40,000 for a ready-to-fly SLSA) and being simple to fly. As seen in the inset photo, Anyang vice mayor Zhang Manru visited Paul’s display along with other associates from China.

Evolution Trikes made another airshow splash. Although they set a blazing pace for demo flying — more on that below — what may distinguish the company the most was their trek from central Florida in four Revo weight shift aircraft, a 17-hour journey. Anyone who says trikes can’t fly long distances evidently never examined one from Evolution.

Evolution’s Larry Mednick reported that AirVenture 2015 was “one of the busiest shows I can remember. The flight pattern in the ‘Fun Fly Zone’ was so full it was difficult to get a chance to land at times.” He added, “The flight line was packed with smiling faces watching the takeoffs and landings that were happening every few seconds.” He observed that more people than ever evidently wanted to experience the fun instead of just sitting on the side lines.”

“We flew two Revo aircraft almost every minute we were allowed to fly and we had a line of folks holding onto yellow waivers waiting for their opportunity to go up next.” The Revo demo pilots kept very active — a fact many in the Ultralight Area noticed. Larry reported more than 120 demo flights given.

“One of my fondest memories is of a young boy who was next in line to fly when the field shut down operations,” recalled Larry, who promised the lad he could fly the next day. “Sure enough the youngster walked up to our booth with his yellow waiver in his right hand while waving with his left. His time was limited as his dad and grandfather wanted to depart soon. Concerned he might miss his chance, he trudged away with his head a bit down. Ten minutes later he came running back with the biggest smile on his face. He’d convinced Dad to wait a bit longer later so we strapped him in and off we went. He took the controls and flew better than most of the adults that had their hand at piloting a Revo earlier that week.”

So, three Light-Sport companies flew more than 360 demos with five aircraft. I have no way to know, but my bet is that is more than nearly all the other companies all over the sprawling grounds of Oshkosh … combined. Bravo!