Day One of Sun ‘n Fun got off to a solid start even if a number of light aircraft arrivals are still pending. Rans Aircraft boss Randy Schlitter is one stuck behind a solid band of weather in northern Florida and he is not the only one. 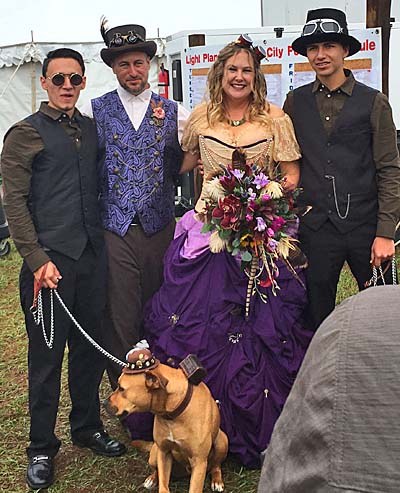 Day One also brought afternoon showers that drenched the grounds for a few hours. This didn’t dampen spirits too badly, though, and the rest of the week is looking good. If you are planning to attend, your timing seems about perfect.

Before the showers, we shot a video on the venerable Kolb Firestar and another with a first-ever U.S. sighting of Rotorvox’s C2A. Not willing to risk expensive camera gear we scrubbed video recording for the rest of the day.

In LAMA‘s LSA Mall a great crop of airplanes are in position while the big tent holds a full display of engines for light planes. More on the Mall later but all of Paradise City had a good turnout of vendors with airplanes of all types.

The first day ended in a rather special and unique way with the wedding of Evolution Trike‘s Larry Mednick and Amy Saunders. A large crowd filled a tent to help them celebrate their nuptials.

Paradise City Chairman Gary Fredell presided and Sun ‘n Fun, Inc., main boss “Lites” Leenhouts performed the ceremony. The wedding was done in the style of “Steampunk” (a few folks said they had to Google it* to know how to dress) — many rallied to the costuming, making for some interesting visuals.

Congratulations to Amy and Larry!

As the wedding reception got underway, a mini airshow took place.

At the end of a wet, mostly non-flying day, a formation of six powered paragliders got in a few pattern laps. With calm winds and sufficient cloud clearance, the six pilots did a nice job of holding their stacked, staggered pattern even throughout turns; a few even had smoke available. Good job, aviators! It was fun to watch and I saw a number of smartphones turned their way.

Here’s a very short clip of the paraglider formation.

* Steampunk is a genre of science fiction that has a historical setting and typically features steam-powered machinery rather than advanced technology.