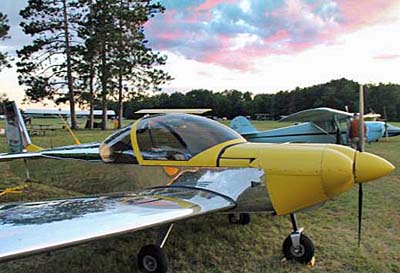 Pat and Mary Hoyt’s 601XL (with 650 canopy) and a 2700-cc Corvair at Brodhead Wisconsin in 2013. They also flew to Oshkosh and the Zenith open house in Mexico, Missouri this year.

Five Corvair-powered Zenith kit-built aircraft flew into the 2014 Open Hangar Day event and parked together for this photo in front of the airport terminal building. 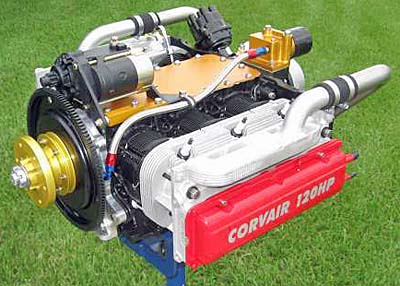 all photos courtesy of FlyCorvair. 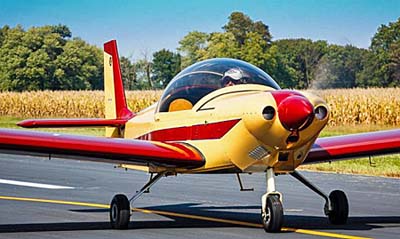 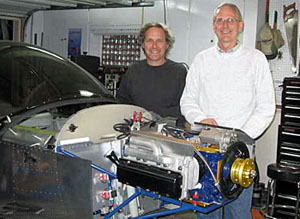 Zenith Aircraft has shipped thousands of airplane kits and have examples of Chris Heintz designs flying all over the country and around the world. The kit company run by Chris’ son Sebastien has been at it nearly a quarter century in Mexico Missouri and in my humble opinion deserves the success they’ve achieved by operating the business professionally and by serving their customers well. Two of the many ways this happens is through their Open Hangar Day event — which they’ve hosted since moving to Mexico — and by supporting just about every powerplant aimed at the light recreational aircraft market. Recently I wrote about Viking engines and I’ve often written about Rotax, Jabiru, Continental, and UL Power. One that I’ve left out of the review has been William Wynne’s Corvair-based powerplant and I am pleased to correct that oversight.

Wynne reports that he has been continuously building, testing and flying Corvair engines for 25 years, since 1989 (by the way, longer than Zenith has been located in Mexico). At last count his company reports that their engines power about 500 aircraft. William earned a Bachelor of Science degree in Professional Aeronautics and is the holder of an Airframe & Powerplant certificate from Embry-Riddle Aeronautical University. Of his Corvair engine conversion, he wrote, “My extensive testing over the years indicates [this engine can provide] 100-120 horsepower with the degree of reliability necessary for flight engines.” This power range suits it perfectly for light kit aircraft in the age of Light-Sport. You might wonder why he chose to use the Corvair engine and the answer might surprise you.

Chevrolet’s Corvair engine is a six cylinder, horizontally-opposed piston engine used in the 1960s-era Corvair automobile. Wikipedia reported, “It was a highly unusual engine for General Motors [in that] it was air-cooled and used a flat design with aluminum heads and crankcase.” My video partner added this, “Few people know it, but the General Motors Corvair engine was developed for GM by a company called Eastern Aviation. GM was after a light helicopter contract from the government, and had Eastern Aviation develop this engine as a powerplant.” He continued, “GM never got that contract and in an attempt to compete with the European sport/touring car manufacturers, General Motors decided to use the engine and launched a small sports car to be powered by an air-cooled engine similar to the VW Beetle. Between 1960 and 1969 GM manufactured and sold 1,700,000 of the rear-engine, compact cars. Approximately two million engines were built.” Read much more detail about the Corvair engine at Light Sport Aircraft Pilot.

Before Zenith’s event this year, William Wynne held another of his four-day Corvair College seminars. “We had 74 people attend and 11 of them fully assembled and test ran their engine,” reported Wynne, adding that “about 25 more made good progress.” He indicated that this was the second Corvair College he and Zenith Aircraft’s Sebastien Heintz have collaborated on before the airplane company’s open house. Working seminars of this sort are meant to assist builders but also serve education and marketing purposes. A few caveats: Most aviators and builders realize that General Motors and Chevrolet do not authorize the use of Corvair engines for use in aircraft. Wynne’s FlyCorvair enterprise is not affiliated with the car company. Corvair conversions are not type certificated and have not attempted to meet ASTM standards for Light-Sport Aircraft.

In addition to putting on Corvair College, William visits his builders. “I have made hundreds of house calls,” he reported. As an example, the nearby photo shows Wynne (on left) making a house call to customer Larry Winger in California. “His engine ran at Corvair College #18,” said William. “Larry’s aircraft is a magnificent Zenith CH-650, built from plans, not a kit. The aircraft has since been completed and has been moved to the Chino airport. Larry exemplifies many of the finest qualities in homebuilding. When he started the project, he had never built an engine, a plane and was not yet a pilot. He has since accomplished all three.” According to many Corvair engine installers, Wynne often inspires his builders. You can read much more about this on the company website.