I have to admit my pleasant surprise. This tie-up of Copperstate and Buckeye Air Fair might be exactly what is needed to generate a major show in the Southwestern USA.

Let me be fair. Other West Coast aviation events have interesting qualities but none has ever risen to the level of AirVenture Oshkosh or Sun ‘n Fun. Those two dominate general aviation events. Both are “back East.”

With big pilot and aircraft populations in California, Arizona, and Washington, why have we no major shows in the West? No one I’ve asked can explain the riddle but could Copperstate Buckeye Air Fair be the right combination? Only time will tell yet on Saturday, crowds were as thick as Oshkosh, albeit in a much smaller area. City planners offered an airshow and lots for attendees to look at plus the Copperstate trade show alongside the Buckeye Air Fair gave the public close access to pilots operating all manner of light aircraft.

Serious airplane buyers encouraged vendors on Thursday before the public attended. They came out in huge droves on Saturday. Vice Mayor Eric Orsborn, whom I interviewed on video, estimated 15-20,000 people that day. It looked like it and we have video proof. By the way, Eric is not only a city leader, he’s a pilot who just earned his ticket. His wife is also pursuing flying lessons and is going through ground school now.

If Sunday is equally strong, most will consider this pairing of city air fair with industry trade show to be a resounding success. Vice Mayor Eric said the city was very pleased about the link-up and sees good things in the future.

A year ago, I got to fly the 915 in Wels, Austria at a Rotax journalist event after Aero Friedrichshafen. 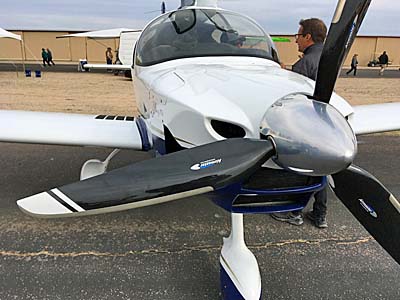 In two quickly linked flights, they let me compare 915 to 912iS. That was most helpful but I did not know either airframe well so it was challenging to compare performance with my earlier experiences. Now, I have a better picture.

At Copperstate a couple years ago I flew Sling 4 with Rotax’s 914 Turbo. I was very impressed, feeling it flew as well as the Sling LSA. Dare I admit I actually liked the four seater’s flight qualities better than the LSA?

Like Sling 4, Sling TSi is not a Light-Sport Aircraft. It cannot be flown with the Sport Pilot certificate. Several reasons explain why, even though the new model closely resembles the Sling LSA.

First, it’s a four seater. Secondly, it has much higher power. That’s allowed but the Rotax 915 engine currently requires a constant speed prop not permitted under LSA regulations — though perhaps in a couple years. The Turbo Intercooled 915iS energized the Sling 4 airframe much more than the 914. The difference was clear. 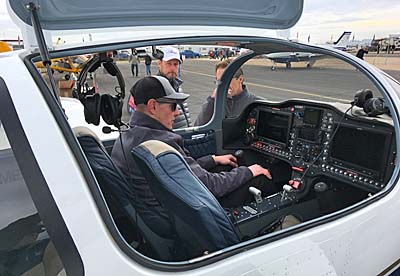 Acceleration was fast, we rolled less than 500 feet and climbed quickly from the start and kept going. Jean d’Assonville and I flew perhaps 300 pounds under gross but CPS Rotax specialist Bryan Toepfer said it did well when loaded to the limit on a flight he experienced. Thirdly, Sling TSi is too fast and too heavy to be a LSA.

Here’s something important… this is not Sling 4. Oh, it appears so similar that I would not have known without closer inspection. Instead, Sling TSi is a nearly brand-new aircraft from nose to tail, literally. The distinctive Sling nose cowl has also changed subtly, better accommodating the 915 and its new hardware.

Aft of the engine compartment, Sling TSi uses dimpled flush rivets on the front portion of the fuselage and on the leading edge of the wings. This clearly works to pick up the speed of Sling TSi without raising its stall speed. 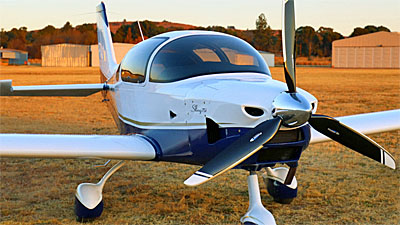 The wing itself is a fresh new airfoil and wingspan is about 16 inches shorter on each side.

The tailplane has counterbalanced surfaces to reduce chances of flutter given Sling TSi’s speedier ways.

Aloft we saw 128 knots at modest cruise power and 3,500 feet MSL. Coming out to the show Jean and Wayne reported seeing better than 160 knots TAS and 180 knots GPS groundspeed, thanks to a tailwind. Fuel burn was a bit over six gallons an hour. Climb out of Buckeye (1,000 foot field elevation on a cool day) averaged 1,000 fpm and we saw 1,500-1,800 fpm on successive climbs from a touch and go. 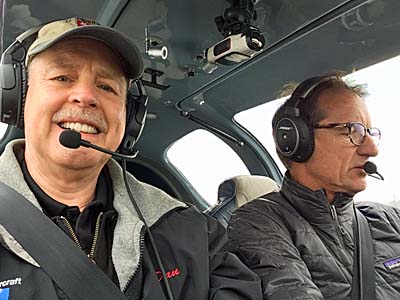 Stalls in all configurations were very mild, even with full stick aft and no quick effort of recovery. At full power, Sling TSi would not stall and only wobbled the nose to signal the pilot — well, that and a clearly audible stall warning plus a very steep deck angle.

Handling was very responsive but steady with a light touch even in steeply banked 720 turns. My efforts at dutch rolling produced acceptable results either fast or slow.

The landing was straightforward. Sling TSi manages energy very well — an LSA-like feel, it had — making roundout and touchdown quite easy. Visibility is good, a very good thing at a busy Buckeye Municipal (KBXK) when numerous airplanes entered the pattern to pay a visit.

In all, Sling TSi is a commendable achievement, a further refinement of the original Sling LSA introduced in 2009. In that decade, Sling has delivered more than 500 aircraft, Jean indicated.

We recorded a full Video Pilot Report with cameras on and in the airplane. When it’s done in editing, this will provide much more detail and very few complaints about The Airplane Factory‘s Sling TSi. Well done, Mike Blyth and team, well done indeed!