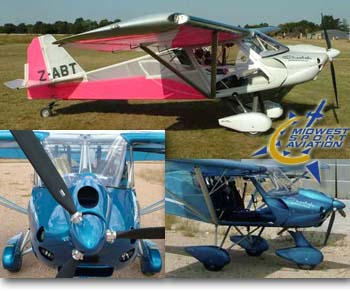 Rainbow Cheetah — I love the gnarly, gusty cowl design on Cheetah and it has unusual features like folding armrests with a built-in throttle on the end. Get a closer look in my video review of Cheetah.

Reaching SLSA model number 100 produced loads of media attention and a feeling of pride in reaching such a benchmark in less than five years. How do you follow that act? With SLSA #101, naturally. *** Welcome to the Cheetah from Rainbow Aircraft in South Africa, imported by Midwest Sport Aviation based in Wisconsin. While working on ASTM approval the Syvertson brothers sold a kit version. If this modestly priced SLSA is beyond your budget, the Amateur-Built kit can save $10-20,000. *** The ready-to-fly Cheetah represents one of the true bargains of the SLSA industry, priced at $52,950 for either trigear or taildragger models powered by the 85-hp Jabiru and delivered with a MGL radio, cloth-finished interior, and those cool swing-up armrests with built-in throttle on each side. Even well optioned, a fully-built SLSA Cheetah can stay under $60,000 and that’s the price some folks expected for Light-Sport Aircraft back when the rule was announced… so there you go. (Actually, Cheetah’s base price is the equivalent of $46,350 in July 2004 dollars.) *** Cheetah is also unusual in offering four engine choices. Besides the standard Jabiru 2200, you can choose the 65-hp Rotax 582 two-stroke powerplant or pick an 80-hp/100-hp Rotax 912. This LSA uses a high-tech laminate material for wing and fuselage covering that helps Cheetah stay very light so it can operate well with the smaller engine. And, if you choose the R-582, you can knock $4,500 off the already-low price.