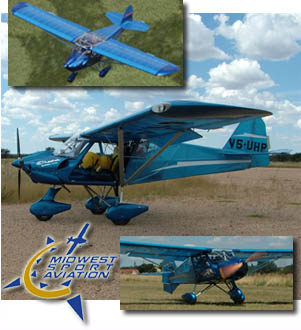 We have many great airplanes among the 62 models in the SLSA fleet. But the price tag for some of these beauties could motivate you to consider a kit. Why not? Homebuilts and Ultralights proved many folks could manage the build effort. Organizations like EAA are ready to help. *** With all that in mind, Midwest Sport Aviation would like you to consider the Cheetah XLS they import from Rainbow Aircraft in South Africa. The fixed wing aircraft shares traits with the Ikarus C-42, for example, both use sewn Dacron coverings. Cheetah also resembles the French SkyRanger which remains available in the USA. Like SkyRanger, Cheetah is a fast-build kit. *** Trike expert Mike Blyth formed Rainbow Aircraft in 1995 with his Ukrainian partner, Vladimir Chechin. Blyth sold his interest a couple years ago. Cheetah first flew in September 2001; today Rainbow turns out six aircraft a month. *** Cheetah has a centrally-mounted joystick, a 47-inch cockpit, 81 pounds of baggage, a 1,245 pound gross weight and a useful load nearly equal to its empty weight. “Kits are priced at $21,950 and you can complete the aircraft for around $35,000 with the Jabiru engine,” says Steve Syvertson of Midwest Sport Aviation.