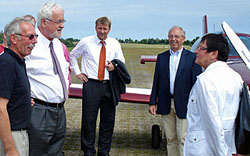 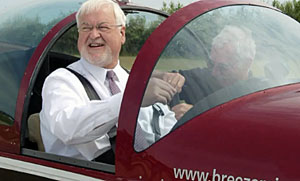 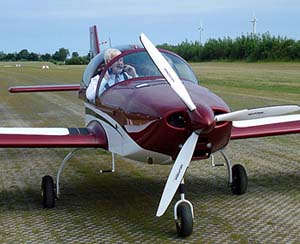 Check out that cool runway surface. Is it pavement or is it turf? It’s both! photo courtesy Breezer Aircraft

Politicians take actions that are often viewed negatively by small business owners, which term basically defines nearly every LSA producer. But sometimes government leaders do good things; this may be one of those stories. Even while EASA (the European equivalent to FAA) talks about job-killing regulations, perhaps the cottage industry of Light-Sport Aircraft discovered a new friend in high places. *** Breezer Aircraft makes a handsome and impressive all-metal airplane in the north of Germany. The design has been around a decade but new management took over in 2006 and they’ve been forging ahead. Among other positive developments, Breezer recently moved to a new airfield and they were surprised and pleased when a German state official showed up to helped commemorate the event. “Schleswig Holstein (the northernmost of the 16 states of Germany) Prime Minister Carstensen opened our airfield,” boasted Breezer officials. “This is already pretty remarkable. But then PM Carstensen stepped into one of our aircraft and asked for a lift to his next appointment and this was quite astonishing.” Can you imagine any American politician doing such a thing? *** “Prime minister Carstensen gave an amazing speech during our Grand Opening,” reported the company. He focused on the initiative and the innovation of companies like Breezer that call Schleswig Holstein their home. Right before his talk, a flock of five Breezers arrived in formation from the LSA manufacturer’s nearby temporary base at Husum EDXJ. *** Photos show Breezer Aircraft’s new new airfield equipped with Terra Grid, grass planted in a pattern of solid material. “It’s like an green aircraft carrier,” they say. This new field more easily allows Breezer customers to visit by plane. *** Mr. Peter Harry Carstensen is President of the Federal Council (Bundesrat) of the Federal Republic of Germany and he is Prime Minister of the German State of Schleswig-Holstein. The President of the Federal Council ranks No. 2 in protocol after the German Federal President. Hmmm… maybe Mr. Carstensen can help LAMA Europe in its battle with EASA over the burdensome regulations they propose? At least it appears he’s a friend of light aircraft.