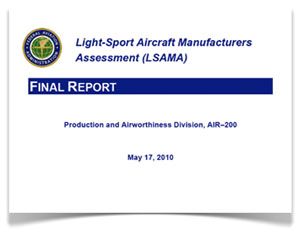 Report Issued — After months of assessing LSA providers and poring over the results of 30 on-site surveys, FAA issued its report. See the Executive Summary. 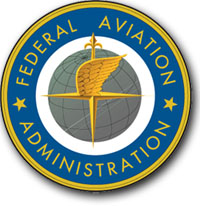 EASA is approximately the European equivalent of FAA. It is required to fund itself through “Fees and Charges” paid by producers.

LAMA-Europe was formed to cope with burdensome regulations EASA proposes.

Recent government actions cast a shadow over the freedom enjoyed by the LSA community. When issuing the new rule in 2004, FAA relinquished direct involvement with aircraft certification in an admirable display of innovative experimentation. The new approach depends on industry consensus standards, often referred to as “ASTM standards,” to certify an aircraft. *** In May this year, FAA issued its Manufacturers Assessment report following the agency’s visit to 30 manufacturers or their U.S. importers (mostly the latter). The report is “tough love” in that it shows many ways the industry must improve… with an implied “or else” lurking in the margins. Top FAA and NTSB officials have publicly and repeatedly said they are generally satisfied with the safety record of this five-year-old industry. But many in FAA are accustomed to government having a significant oversight role in the manufacture of aircraft and that was upended with the LSA movement. It’s often hard to give up control (right, parents?). *** Across the Atlantic in Europe, EASA is proposing a “top-down approach” (EASA’s term), meaning you take all the regulation of, say, airliners and whittle away things you don’t need. That leaves a lot of unneeded regulation. Contrarily, in the U.S., FAA used — again, according to EASA — a “bottom-up approach” where you sweep away all regs and start from scratch, theoretically just with the ones you need. Consequently, EASA is proposing a much heavier hand, requiring LSA producers to gain Design Organization Approval (DOA) and Production Organization Approval (POA) in addition to some type of Type Certificate. And since EASA must pay for itself through “Fees and Charges,” a small manufacturer’s costs may rise dramatically… by many tens of thousands of euros, every year!, to maintain manufacturing approval. Enacted as proposed, many experts believe the costs could gut the LSA industry in Europe. *** Despite all the challenges, the promise remains for a worldwide unified set of relatively simple standards. FAA continues to work in harmony with industry. And LAMA-Europe was formed to confront EASA’s burdensome proposals. LSA remain the lowest-cost fully-built aircraft you can buy. These advantages will overcome the dark clouds, I’m confident.