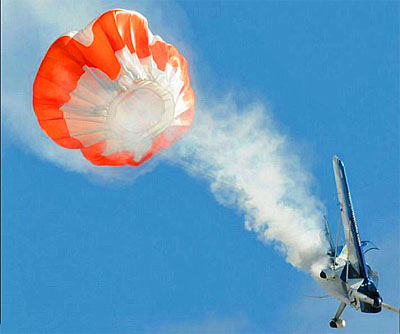 When I first saw this news story I thought it was one we reported earlier involving a similar aircraft and parachute. However, what grabbed my attention was the clarity of the still photo seen nearby.

It was, and it was not the earlier story. Let me explain…

The deployment event recently reported is not new even if that’s how the mainstream media portrayed it. Many months ago, a test flight got into an uncontrolled flight situation — a “normal” occurrence, that being what test flights are intended to discover. A successful parachute deployment followed. However, this provides an opportunity to learn more about airframe parachutes.

I know something of this because for 18 years, I worked closely with BRS Parachutes of South St. Paul, Minnesota. An airframe parachute system makes a compelling story that media reporters loved. At one time, BRS and its whole-airplane parachute systems were featured on seven (yes, 7!) different TV documentaries at about the same time. Since I was the media specialist, I was busy with one TV crew after another. Print loved us, too. The World Wide Web was barely in development at this time.

While I loved helping to spread the word, what I always lacked was good photos or video. Almost no one is ready for such an event. Rarely were any photos available, other than an airplane on the ground with a parachute laid out nearby. When airborne view were captured, they were usually poor, blurry images. Video was even more precious. (For more info, see several BRS-related articles here.) 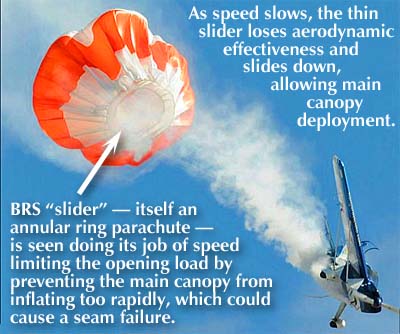 This deployment can be viewed through a video from inside the cockpit. It’s fairly poor but does show a pilot trying other solutions but when unable to regain control, he deploys the parachute. If you check BRS’ Facebook page, you can watch this video that went viral, earning more than 750,000 views, 900+ comments, and 6,300+ shares. This video is not related to the still photos seen with this article.

However, the photo capture is one of the best I’ve seen so it provides a teachable moment about parachute technology, specifically, the “slider” ring. This modest innovation is strikingly simple and effective. In short, it keeps the main life-saving canopy from rupturing if deployment happens at high speed. The slider only functions when airflow is high.

This is a good time to advise, “Please fly safely and work to avoid situations where a parachute is your only option. If you cannot, I hope you had the foresight to add a parachute.” I believe in them. I hope you do or will, too. We don’t want to lose any of you to preventable accidents.

The story as reported… 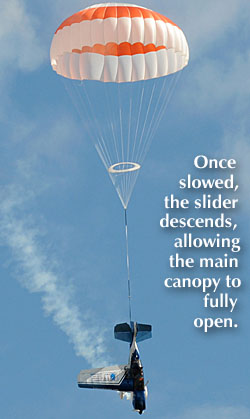 Here are some portions of the article, which relates, “At the start of the clip the pilot is seen trying to steady the plane as it rapidly descends while spinning around.” Remember, this is a test pilot exploring the flight qualities and performance parameters of a Light-Sport Aircraft, which I agreed not to name (but it was obvious to me that this was not the aircraft in the still picture Daily Mail used).

“The dizzying video shows the aircraft spinning faster and faster as the scenery speeds past. The pilot … was forced to deploy the safety measure during a spin recovery test.

“He escaped uninjured and the aircraft was fixed and ready to fly the following day.”

Daily Mail goes on to report [BRS] company founder Boris Popov as saying about the clip, “The pilot wants to remain anonymous as well as the location but we can say it was filmed in Asia and the plane was flying the next day.”

I know a little more but the actual airplane or incident is less the story than the success of the parachute product. These devices have saved many lives — BRS alone has logged nearly 400 “saves” and other companies like Magnum add to the number. I hope you will consider such a system for your aircraft. If you elect not to, then, please fly as safely as you can.

Happy New Year, everyone! I wish you many happy hours aloft in 2018 and I hope you never have to see your parachute.