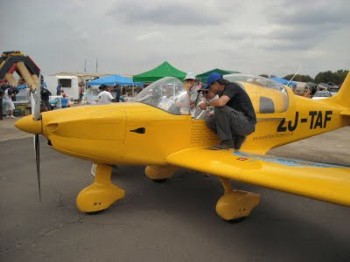 Last July I ran an item on the grand LSA adventure of two South Afrikaaners, James Pitman and Mike Blyth, who set out to fly around the world — in an LSA! *** Happy to report the boys finished the epic flight, all 45,150 km (27,090 miles) with a stop at EAA Airventure 2009 to boot – in 40 days! *** One memorable highlight: two friends of the pilots greeted the return landing in Full Monty mode: they waved large South African flags, wearing boots…and nothing else! (check out those merry buffsters in the photo). *** The story was just carried on the official Johannesburg, S.A. website, written by Makoena Pabale. *** Anybody who doubts the durability and utility of LSA, take note: the chariot of choice was the Sling, built by The Airplane Factory right in Joburg. *** BTW: the company is their own startup, and the Sling is their first design. Now that’s confidence for you. *** The attractive metal low-winger can be built from a kit or bought ready-to-fly. It’s not certified for the U.S. — yet — but does conform to ASTM standards with a 1320 lb. max weight and a clean stall of 44 kts. It’s also powered by the ubiquitous Rotax engine (two 912 models and the 914). *** James Pitman is quoted in the story as saying, “The experience was just amazing.” *** The westward odyssey included stops in Hawaii, Brazil, New Guinea and 10 other countries. *** One thing that stood out to me (until I did the math): the story reports the dynamic duo reached Oshkosh in just 10 days and five stops from South Africa, then went on to complete the circumnavigation in only nine more stops! *** These boys either have sturdy bladders or kit-built relief tubes. *** Meanwhile, the math: that’s an impossible range per tankful, almost 2000 miles…naw, can’t be right — company specs call for 800 nm. Well, author Pabale, nobody’s perfect. *** Meanwhile…Well done, lads! *** —photos courtesy The Airplane Factory *** [UPDATE…ByDanJohnson] — No, Jim, the South African LSA really can fly a couple thousand miles non-stop. Well, a production Sling can’t fly so far, but the round-the-world version carries 118 gallons of fuel. See more details in my earlier SPLOG. But, yup, those boys got some bladders!