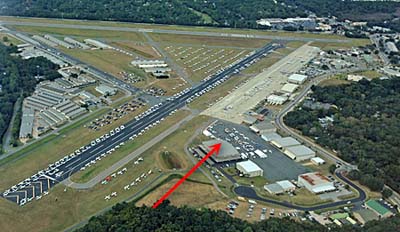 Overhead at the St. Simons AOPA Fly-in (arrow depicts the main hangar and center of activity). 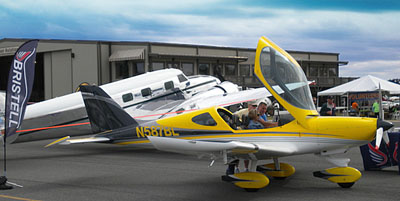 It was interesting to visit Palm Springs for the Flying Aviation Expo‘s first-ever event at the location AOPA once said was their single best venue for the series of annual events known most recently as Summit. The Palm Springs show was larger when AOPA put it on but several reasons exist: • AOPA has 400,000 members to tap in encouraging attendance (though even at their strongest event, they drew somewhere under 20,000 visitors, I’ve been told) • the Flying Aviation Expo was a brand new event • …and, promotion for it had only begun a few months back • Flying magazine signed on as the name sponsor for the Lift Management organizers only a few weeks back. Yet I’d like to put this in perspective. Setting aside the really big shows like AirVenture and Sun ‘n Fun, aviation events appear to be doing reasonably well when they attract 5,000 people. That number was suggested for one or two of AOPA’s new Regional Fly-ins (though only the member organization knows the exact figures and even they may not have an accurate count; for example, I flew in with two other men and we were not counted so far as I know). Copperstate draws 5-6,000. This year’s Flying Aviation Expo reported “around 5,000.” Update 11/17/14 The final edition of AOPA’s national Summit event in Fort Worth, Texas last year counted 5,700 persons, it was recently reported.

So, thinking of how many attend aviation trade shows and fly-ins and what that means for the health of aviation and how good it is (or maybe isn’t) for vendors at these events, here’s some more on the AOPA events. According to our good friends at General Aviation News and their “The Pulse of Aviation” eNewsletter (sign up here; it’s free), “AOPA President Mark Baker reported that the regional fly-ins were such a success that 45 airports are now bidding to host next year’s fly-ins. AOPA officials estimate that between 16,000 and 17,000 pilots and aviation enthusiasts attended the regional fly-ins, which were held throughout the country.” As noted above, earlier reports pointed to a turn-out of perhaps 5,000 visitors at the strongest 2014 events. Mark Baker’s reference was for all the AOPA regional events.

Do you see any commonality here? Five thousand seems to be a solid and workable number. I asked many vendors what they thought of the Flying Aviation Expo event and all but one said they would return in 2015. My information is not scientific nor are vendor speculations something organizers can take to the bank. I asked a smaller number of exhibitors at AOPA St. Simons (KSSI) fly-in and they also seemed to feel good about their participation (although at slower times the phrase “vendor bonding” enters the conversation). Naturally, these smaller shows carry lower space costs but their smaller size allows deeper conversations with visitors compared to the onslaught that can occur at the biggest events. At the smaller venues attendees seem more motivated and relatively few of those “general public” folks asking basic questions interrupt the more serious pilot/buyers at the focused shows.

One of the grand experiments in the smaller, focused venue shows is the Sebring U.S. Sport Aviation Expo, now entering its second decade. We often call it the Sebring LSA Expo to abbreviate a bit but that is not entirely accurate as kits and some larger airplanes are also present. Sebring reports drawing 15,000 or more though this count may be similar to Oshkosh where I’m told one person coming in the gate counts each day even if that individual repeats for several days. I don’t believe it truly matters how you count so long as organizers are consistent. In the next few days I’ll have more about Sebring. The central Florida show is repositioning itself as the “Affordable Aircraft Expo,” featuring “Light-Sport, Homebuilt, Refurbished Production Aircraft, and Ultralights.” We’ll start covering details in the barely two months remaining before it kicks off a new season of flying on January 14th.