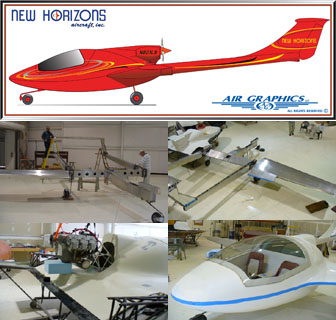 An artist’s concept starts to take form at New Horizons’ facility. A composite body is attached to a metal structure and is mated to a 120-hp Jabiru 3300 engine.
Info: email Michael Hudkins or call 407-375-1926.

Unless you’ve closely scoured the Internet or shows like AirVenture, you may think Light-Sport Aircraft are mostly foreign. By FAA registrations, that’s still correct; some two thirds are imports. But Yankee companies aren’t playing dead. *** An Orlando, Florida company says it has secured funding and is proceeding with a proof of concept aircraft called Horizon. This is a wide (51 in.) cabin, pusher engine, twin tailboom design using composite and metal construction with a base price target of $79,900 (probably a lot less than the “micro-jet” variation they see as a future project). *** One of the founders of New Horizons Aircraft is S-51D designer, Jim Stewart. His 70% replica Mustang that sold about 70 kits was powered with a 400-hp Chevy big-block engine. I took a flight in this thrill machine several years ago and I can still remember its powerful acceleration down the runway. The company’s distinguished group of founders is led by Michael Hudkins, an experienced pilot and CPA who once assisted funding of the S-51D project.