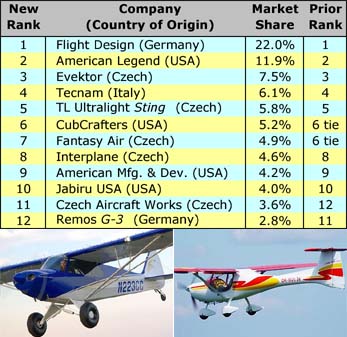 As always, thanks to the Czech Light Aircraft Association‘s Jan Fridrich for the compilation of FAA data, a time consuming task he does faithfully each month. FAA registration data does not precisely equal customer deliveries.

FAA registration data through August show continued growth with another 58 SLSA listed for a total increase in 2007 of 557 aircraft (88%) in just eight months. The lone share change in the Top Twelve was CubCrafters rising another notch to 6th, pushing Fantasy Air down to 7th. CubCrafters has been rising steadily after their late entry, though they still significantly trail rival American Legend. *** Despite being a trike enthusiast, I’m amazed to observe the 15% share of all Special Light-Sport Aircraft that are weight shift control aircraft. France’s Air Creation and Australia’s AirBorne dominate the category with a registered 105 and 61 models respectively. Six trike models share the market. *** Powered parachutes have also done respectfully well in a few months with 5% of all SLSA registrations. Infinity (27 aircraft) and Powrachute (24) overshadow Summit (7). Both weight shift and powered parachutes benefit from lower purchase prices but also from a loyal base of pilots who enjoy these unorthodox flying machines. Having flown both, I suggest you keep an open mind until you sample them.