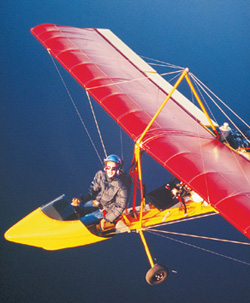 The Drifter, one of the most popular and rugged ultralights ever built, is now sure to continue its life under the direction of one-time Drifter marketing man, Phil Lockwood (nearly at the beginning of his career in light sport aviation).

Among all airplanes I’ve flown the AirCam may be the most fascinating. This superlative twin-engine “ultralight” offers flying in a way few (or no) other airplanes can. (I earned my multi-engine rating in an AirCam.) Given my interest, I’ve followed the efforts by owner Antonio Leza to sell the operation. Over the last few years several would-be buyers came and went. No deal happened. Last fall I SPLOGged that Sebring businessman Shawn Okun appeared to have it sewn up. Again, no deal. *** But that’s over now. The dust has settled and AirCam is headed back to someone I consider its “rightful owner:” Phil Lockwood. This time the sale is for real and includes all design rights, tooling, jigs, and inventory for the AirCam and Drifter. Phil has a long history with both designs; he knows each intimately. *** Phil and wife Tish have worked hard to build an expanding enterpise at Sebring. Recently, they added building space and one area set aside for growth will now be filled with AirCam and Drifter components. Phil reported, “A LOT of inventory is included.” No production plans have been announced yet. Phil clarified, “We won’t have time to work on this until after AirVenture Oshkosh,” so it will be August before further announcements can be made. Meanwhile…Welcome home, AirCam and Drifter!