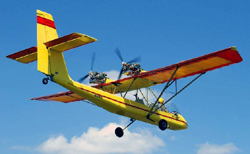 Easily the biggest “ultralight,” AirCam has become a favorite to all who’ve flown the design first created for used by National Geographic explorers of Africa. AirCam is a kit-built model with nearly 150 flying.

As mentioned in the SPLOG from Friday Oct. 21st, I have some big news in the world of recreational flying…literally big in the sense of involving the biggest “ultralight” of them all, the AirCam twin. This delightful flying machine, first created by Phil Lockwood and crew, has been languishing under the leadership of investor Antonio Leza who became full owner of the design a few years ago. That’s all about to change when Antonio and Shawn Okun, the ambitious head of Sebring-based Floatplanes & Amphibs, make a detailed announcement at the LAMA/LSA Marketing Group “hospitality tent” during AOPA’s Expo in Tampa November 3-4-5. They will announce that a group assembled by Okun has signed an agreement to take over ownership of Leza AirCam and its building and land lease on the Sebring, Florida airport. Come hear the details at the Peter O. Knight airport display of aircraft on Friday November 4th at 2 p.m.