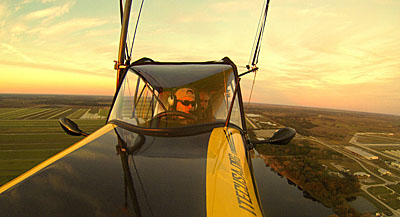 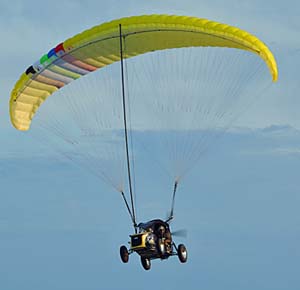 Maverick uses a T-bar support with a long carbon fiber mast holding the parachute when on the ground and a lateral cross bar to better support the flexible wing. 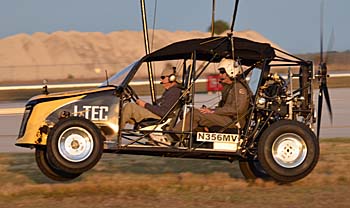 Maverick comes in for a touchdown on its four, road-worthy wheels. 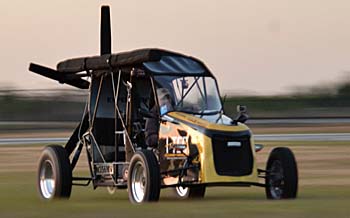 Whizzing around the grounds at Sebring, Maverick shows its land vehicle prowess. 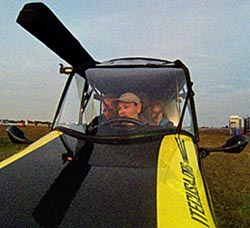 Two persons can sit in the rear when Maverick is a car; one one sits aft when it flies as an LSA. Seen in the rear are author Roy Beisswenger and magazine editor Vickie Betts. 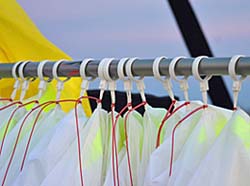 Special thanks to Roy Beisswenger for this first-impressions report on the I-TEC Maverick. It is part of a comprehensive story Roy prepared for Sebring 2014 that will be coming soon in the February issue of Powered Sport Flying! Roy is a highly experienced powered parachute pilot, instructor, and Designated Pilot examiner. He is also gaining experience in gyroplanes — both types of aircraft are primary subjects of the magazine he publishes with Vickie Betts. Roy begins …

I have to admit that I thought that climbing into the back seat of the Maverick flying car would be a fun and OK experience. I really didn’t expect it to be much more than fun and OK, though. Granted, I’m in a regular auto-like seat (worse, the back seat) and I’m flying. I can’t see the wing anywhere. Oh well, like that hasn’t happened before. After all, having been a powered parachute pilot for a couple of decades and a gyroplane pilot for several months, I’m completely used to not seeing a wing on my aircraft. One wing is high enough up that I forget about it and the other is moving so fast that I can’t see any part of it after takeoff. So the car leaping into the sky with no visible means of support shouldn’t have been that surprising. Maybe part of the problem was that I was jonesing a little bit for some sky. I hadn’t been up even commercially for a few months. Still, there was something about taking off in the Maverick that was a great deal of fun.

First of all, it was remarkably effortless. Even if I’m just doing a check ride or training someone in a powered parachute, it is always a hectic first minute getting the chute kited, centered, and ready for takeoff. Even a gyroplane has a handful of levers, releases, and things to monitor to turn a couple of thin blades into a serviceable wing. As an over-trained passenger, I’m always living acutely through the efforts that others are putting into their takeoffs. With the Maverick, the parachute is already overhead and ready to go. You can tell that plenty of effort went into the parachute deployment system. A carbon fiber mast with sailboat rigging technology are involved plus a little bit of bathroom technology. The actual parachute hangers (photo) remind one of hooks on a shower curtain. I-TEC’s effort on the mast system really works. The Maverick sits on the runway without any worries that the wind will tip it over before the pilot is ready or even sitting in it. When it is time to go, the takeoff is effortless and casual. I-TEC pilot Troy Townsend looked up to check the parachute before adding power. I couldn’t share that experience because I was in the back seat and all I had to look at above me was canvas located several inches away instead of Lexan and zero porosity fabric several feet away.

This also counts as the first time I’ve ever flown in even a semi-enclosed powered parachute. That enclosure was certainly appreciated in the cool evening since I wasn’t wearing anything more than I was wearing the rest of the day. The other big aesthetic differences had to do with the Maverick really being a car. It looks like a dune buggy on the inside with a tubing structure, canvas covering, steering wheel and two huge road-worthy tires visible in front outside the door on either side. Unfortunately, the sun was getting low and I was the last fly of the day. It really was a great taste of future possibilities of the car flying kind. On the ground with the parachute stowed, Vickie jumped in with me (it is a three-seat “car,” after all) and Troy drove us around to get a feel for its dunebuggyness. It is a hoot on the ground, too. I-TEC is the Dunnellon, Florida company that developed the Maverick for mission work in countries with very poor road systems. The purpose-built vehicle works well off-road and really-off-road. That also makes it ideal for recreation.