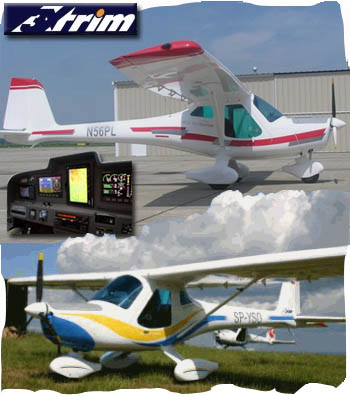 At Sebring 2007, I flew an enjoyable airplane from Poland with the uninspiring name of 3X55 Trainer (see my blog post). A re-engineered and renamed Navigator 600 received SLSA certification on August 22, 2008. [UPDATE 2/19/09] — The North American importer is 3Xtrim Inc. *** Navigator grew up and now boasts a 1,320 pound gross weight and a useful load of 600 pounds with a 47.2-inch cabin width, specified producer, 3Xtrim. I thought 3X55 looked small but she felt sufficiently roomy inside. 3X55 was also very straightforward to fly at modest speeds (88 knots at cruise). And it was so simple to land that the earlier model easily justified the “Trainer” label. *** [UPDATE 7/1/09] 3Xtrim, Inc., reports several N-numbered Navigator 600s are flying in the U.S. and four more are expected soon. Base price for a reasonably well-equipped Navigator is $99,000. Customers can upgrade to a Navigator LTD with the Dynon D100 EFIS; a Garmin SL40 radio and GTX-327 transponder; Airgizmo GPS mount for your choice of Garmin GPS in the x96 series; wheel pants; tinted glass all around; and position lights for $109,000 which represents a good value at today’s euro/dollar exchange (~1.40). Navigator options include amphibious floats, skis, a dedicated trailer, or even a glider tow hook.