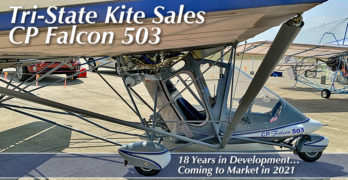 One of the most successful airplane designs of all time is the Quicksilver. Van’s Aircraft of RV fame has delivered more kits, yet with 10,869 RVs presently flying, Quicksilver still remains far ahead with more than 15,000 flying. Naturally, such market success spawned other builders.
Those who attempted to copy and duplicate Quicksilvers have mostly faded away but some enterprises (see at bottom) built a business out of supplying parts and components that Quicksilver itself never offered.
One of the most successful of these is Tri-State Kite Sales, based in Mt. Vernon, Indiana — and no, not Mt. Vernon, Illinois where the Midwest LSA Expo is held every September.
Andy Alldredge started his Falcon project 18 years ago when he was a lad of 20. The airplane looked good enough that I thought it was something new but, nope. This is a well flown aircraft that has been well maintained. 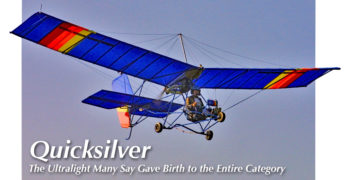 Ah, the Quicksilver! Where to start with this veritable icon of the ultralight sector?
With more than 15,000 flying, it even outranks Van’s Aircraft for kit aircraft that made it into the air — although Van’s has sold more kits in total and no one disputes the Western brand’s leadership position.
The earliest Quicksilvers were hang gliders (last photo). Engines came later but at first the weight-shift seat stayed (nearby image). The pilot had lateral control — still by weight shift — but via lines that moved surfaces. Pitch, however, was fully controlled by the pilot moving his or her body.
Those were fun days and provided wonderful memories (yes, I flew them as weight-shift aircraft). Yet the brand went on to vastly greater development. In this article, our focus is on the original three-axis control model, the oh-so-famous MX (multiple axis).
Quicksilver MX
Quicksilver’s MX entered the market in the early 1980s, like all the models featured in our Vintage Ultralight series. 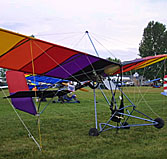 If you want to know any and everything about Quicksilver, one man knows it all. He is even more knowledgeable about the aircraft than the company(ies) that have owned the brand as he’s been associated with Quicksilver for 40 years, through every owner of the California company. His Lousiana company, Air-Tech, now possesses all inventory and tooling for every part the manufacturer made. He and his team can and will support all parts needed for any model… a great thing. Hear from this interesting fellow in this video. 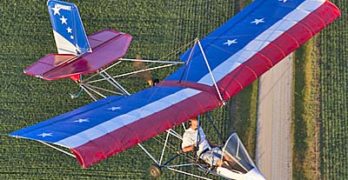 One of the major stumbles in the light aircraft world was the closure of Quicksilver Aeronautic’s southern California factory in Temecula. That ended a long-running era dating back to the 1970s. See articles here and here. Plenty of folks expressed concern.
Their worry was warranted. As a kit supplier, Quicksilver was one of the most prolific in aviation history with more than 15,000 kits delivered, nearly every one of which got airborne after the short build time. Some have been retired due to age, accident, or neglect, but many thousands continue to fly.
What happens when that large fleet can no longer buy parts? With the factory closed, are all those owners orphaned, having no factory-fresh parts available?
Don’t worry, be happy (so the song said).
“We currently have all the Quicksilver parts in stock and are shipping mass quantities daily,” said Gene “Bever” Borne, of Air-Tech, Inc.

Quicksilver’s Sprint has long been a great little airplane. Versions of it have sold many, many thousands of units and they consistently deliver good flying qualities with an excellent safety record. However, some may seem a bit underpowered. Not any more! With Hirth’s 50-horsepower F23 twin cylinder engine, Max 103 is highly energetic. Here how it was done on this video.

In this video, we think you will see something unusual. This is a 1991 Quicksilver GT500 that looks as though it just rolled off the assembly line. That may be common in vintage aircraft but here’s one you can afford and which nearly anyone can fly. Longtime Quicksilver expert, Todd Eleffson went through this particular GT500 from nose to tail beautifully restoring it. A friend who asked me about it bought the plane before AirVenture 2015 ended because it was an excellent value. More of this is coming as Quicksilver are common around the world.

Quicksilver has now completed all the flight testing for the most popular kit to qualify it for Special Light-Sport Aircraft acceptance by FAA. In this summer 2013 video, we speak with Daniel Perez, the Chief Operating Officer for Quicksilver about the challenges in taking an already-successful airplane through the ASTM standards. Daniel gives a review of what all they did and why. This will be one of the most affordable aircraft in the SLSA space and the Quick 2S may meet the need.

Quicksilver is an iconic brand, having sold more than 15,000 aircraft in its history. Pilots around the world have flown Quicksilvers and many are flying in the USA to include flight schools. In this video we speak with sales director Todd Ellefson about the strutted Quicksilver Sport 2S mated to Puddle Jumper amphibious floats. We speak about the experience of flying the float-equipped 2S model. You can build it in 100 hours, but the company is nearing completion of an fully manufactured SLSA version of this popular aircraft.

Quicksilver is one of light aviation’s strongest brands, and also one of the biggest with more than 15,000 delivered since the early 1970s. In this video we speak with national sales guru Todd Ellefson about the company’s plans to achieve Special Light-Sport Aircraft status meaning you will be able to buy a ready-to-fly GT500 or Sport 2S model. Kits will remain available and you can hear about other operations to provide models to enthusiasts.

Here’s a bright Quicksilver Sprint you may want to tour with us. Owner/pilot Jason Pearson bought this very new-looking airplane ten years ago (the kit had been delivered ten years before that). Shortly after he bought it he took it all apart down to every single bolt. As he rebuilt, he made some customizations and additions. You can see it all as we have a close look at this 42-mph-cruising, open-cockpit light aircraft. still photo by James Lawrence