I am writing from Europe, from two neighboring towns in what’s called Upper Austria: Wels and Gunskirchen. The former is where the Rotax flying field is located and the latter is where the sprawling Rotax factory is headquartered. The occasion is the 25th anniversary celebration for the 912 engine series and, by good fortune or exquisite planning, the simultaneous occasion for production of the 50,000th engine in the 9-series.

The large Austrian company that employs 1,100 people in a modern factory produces engines for a variety of applications in large volumes. Among these are engines for BMW motorcycles and others plus a range of engines used in their own products including snow mobiles, watercraft, and on- and off-road vehicles. They also make engines for unmanned air vehicles or drones and, as you are well aware, aircraft engines for Light-Sport, light kits, and ultralight aircraft. Of the latter, they’ve built more than 170,000 engines. The final assembly of the aircraft engines, composing some of the most desired job positions in the company, are done by a special aircraft engine team (photo, red shirts) in a separate facility from the giant manufacturing hall. 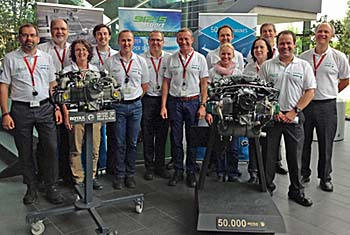 A carefully managed company that encourages and uses a large number of suggestions from their manufacturing personnel is impressive in its detailed approach to high quality products. Improvements small and large are encouraged from workers and successful ideas are celebrated and rewarded. Management and their staff (photo, white shirts) do an impressive job of oversight but are quick to note the value of their team members with wrenches in their hands. Computerized equipment is widely used from fully automated robots to methods of helping workers do top-notch work. An example: Hand-held screw machines not only help workers do their job but send information to computers to count the number of screws installed per engine and to record the torque level for each one. Many other such controls are in place resulting in engines that have very few faults. When a problem is discovered, both innovative and ordinary means are employed to quickly remedy the situation. Top managers meet every day with team leaders right on the factory floor in plain sight of workers. Every engine is test run; aircraft engines have a thorough test program. 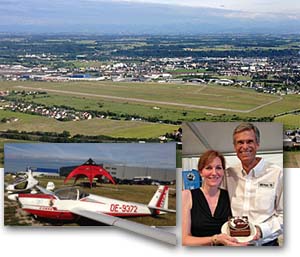 At the Rotax Fly-in groups from 20 countries gathered to help the company and its employees celebrate their 25 years in aircraft engine production that has resulted in 50,000 9-series engines. You can do the math in your head to see their output but keep in mind that figure does not include many two stroke engines nor any of the other engines produced in Gunskirchen. Airfield activities allowed everyone to take flights in 912 iS-powered aircraft or take a ride on the company’s handsome three-wheel motorcycles. I did the latter plus took my first flight in Rotax’s test-bed Tecnam P-92 now powered with the latest 912 iS Sport engine model. Austria is a beautiful country and it was great to gain an aerial perspective of the home airport and factory for this major contributor to the success of Light-Sport Aircraft. Rotax enjoys approximately an 80% market share among light aircraft engine producers and all who attended their event, took factory tours, and met the team members have a better idea why this company has such a convincing lead. Thanks, Rotax, for all your hard work and for a great party to celebrate 25 years of doing it well.

With Francois Tremblay leading the announcements, the following short video provides some feel for the excitement generated by production of 50,000 912 engines over 25 years.