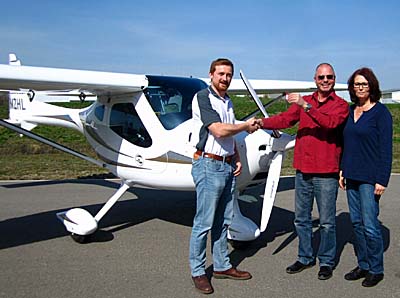 In the late ’90s, an earlier iteration of Remos Aircraft delivered their first aircraft, a G-3 Mirage, originally designed by the very talented Lorenz Kreitmeyer. That was twenty years ago. Recently, the Pasewalk, Germany company delivered serial number 450.

Susanne and Harmut Lang, the new owners of the GXNXT — known as a GXnXES in the United States — took possession at their aircraft after it was flown to Bremgarten in southern Germany by Remos engineer Paul Foltz.

The Lang’s new GXNXT is equipped with the latest avionics by Dynon and Garmin. Upon receipt of the aircraft, Harmut Lang said: “The Remos GXNXT suits our needs perfectly [and] the flight characteristics are amazing and the quality of this aircraft is well known.”

If you are confused by the model name, that could be because attention has been focused on the GXiS model that won European ultralight approval recently. Even more recently, the company made news regarding its new owner, Stemme Aircraft. 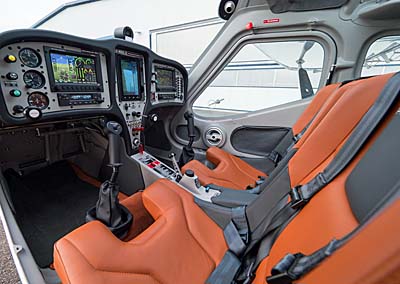 Remos has engineered a handsome interior but it may be their implementation of the Rotax 912 iS that is most impressive. Read my review here.

Today, Remos Aircraft manufactures the GXNXT/GXnXES, powered by the dual-carbureted 100 horsepower Rotax 912S, plus the newer GXiS that utilizes the fuel injected Rotax 912 iS Sport that also develops 100 horsepower. The computer-chip-laden 912 iS burns less fuel in “Eco” mode and does not need to have its carburetors balanced.

The deal with Stemme resulted from Remos meeting exacting standards in the production of structural parts.

In 2014, the company preceded Flight Design in being forced into reorganization, however, they are returning to the skies with strong moves and innovative, high quality light aircraft.

Now certified in Germany as an Ultralight, “GXiS will soon qualify as an LSA,” reported the company in a news release about the 450th delivery. “Both GX models have been popular in flight training operations and as entry level aircraft,” added Remos.