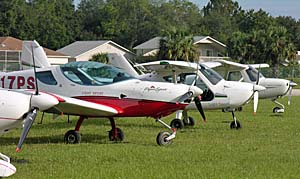 Four LSA and two GA planes made a breakfast outing. 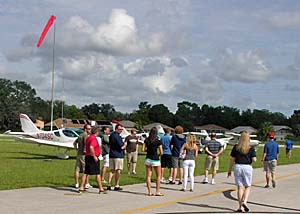 A pretty Florida day in September enjoyed by a group of young aviators and friends. 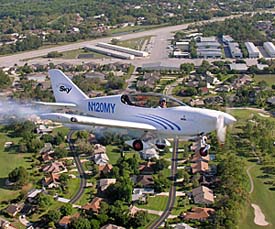 Spruce Creek, near Daytona Beach, has an excellent cafe and great facilities.

A fun thing happened this weekend. Such pleasures occur regularly across the USA where we enjoy so much aviation freedom. This time I got in on part of the weekend fly-out. Plus, I want to celebrate a thriving LSA flight school, another one supported by an arrangement called “leaseback.” I’ll also highlight our newest video that I hope you’ll enjoy.

Successful LSA Flight School — First landings is a central Florida flight school dedicated to LSA. They use five of them in their school including two Remos GXs, two SportCruiser/PiperSports, and a Cessna Skycatcher. First Landings is run by young entrepreneur Adam Valencic and he and his cadre of youthful flight instructors are keeping his fleet busy, averaging an admirable 70 hours a month per LSA, he reports. First Landings is based at Orlando/Apopka Airport (X04). Any flight school would be proud to claim such numbers, so great job, Adam! Get additional contact info for First Landings or any of the more than 400 LSA outlets in America from our FIRM List.

The mostly young pilots and friends that joined Adam on the breakfast outing enjoyed dining at Spruce Creek‘s Downwind Cafe. So, OK, it wasn’t a $50 hamburger flight. Instead it might have been eggs benedict or the Pancake Challenge (which neither of two participants won though they gave a shot at devouring an enormous stack of the sweet treats). Given fuel for an hour’s flying (call it $20) plus breakfast, the tab wasn’t even $50 (except maybe for a couple of less fuel efficient GA planes that accompanied the LSA). Based on the smiles, it was clear everyone enjoyed the experience!

Leaseback Pays Off — A Remos aircraft that joined the Sunday brunchers is one of two such that are leased back to First Landings. LSA investor Eric Strong says this is paying off for him and that he genuinely makes money on the arrangement, in no small part based on Adam’s drive to make his LSA flight school business a success story. Earlier I wrote about a leaseback investor, Joe D, who supplies what is now three Flight Design CTLSs to flight schools under a similar arrangement. If the flight school is as successful as First Landings or Chesapeake (where one of the CTLS models is at work), the leaseback owner gains financially. The school get a new LSA. Students love the roomy, well-equipped aircraft. The airplane investor profits. Everyone wins! What Light-Sport aviation needs is more such deals.

Video LSA Tour — Last but hardly least, you may want to catch our “feature length” (1.5 hour) video on all the aircraft exhibited at the recently concluded Midwest LSA Expo. Along with my trusty cameraman (of Light Sport and Ultralight Video Magazine), we give you a fast 2-3 minute vignette of every airplane visitors got to see. Next year (Sept. 5-6-7, 2013) you should attend if you live in the one of nearby midwestern states. For many more videos — all free and all shown without YouTube’s intro advertisements — visit our dedicated video page.